A Computer Guy Went Into A Writers' Conference And... 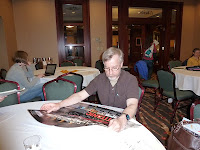 Well, I dragged my computer guy to the last day of this year's NESCBWI Conference, and we both survived to tell the tale. Though I, of course, am the one who is telling it.

We arrived in time for him to become properly caffeinated, and then hit the It's a Great Time for Nonfiction panel. Though he was suitably impressed with the achievements of the panelists, Elizabeth Partridge, Tanya Lee Stone, and Susan Campbell Bartoletti, as well as with their commitment to research, what really struck him was the similarity between the panel and one he saw when he attended a Twilight Zone Convention a few years back. Do not laugh. I, too, have noted the similarities between that Twilight Zone Convention and literary events I've attended.

Next, we hit Making E-books From Scratch: How to Stop Worrying and Love HTML with Brendan Gannon. Computer Guy already loves HTML, but this session was why he was at the conference. No way I was going to that by myself. Ten minutes in, I turned to him and whispered, "I'm already lost." CG, however, was tres, tres excited. He kept muttering, "This is huge. This is huge." At first I was afraid he meant, "This is huge" as in "There's a huge meteor coming right toward us. We have to run." But, no, he meant, "This is huge" as in "This is a huge and wonderful concept." He came away happy. This made me happy.

After lunch, we met John Bell of Oz and Ends in the flesh. I've sort of known him in a noncorporeal way for years, and I'm not just making that up, since he recognized my name when I introduced myself. Or he was most charming and gracious and just said he did.

After lunch, we hit the bookstore where I bought of copy of One Continuous Mistake by Gail Sher, which looks very zenny, and you know what a sucker I am for that kind of thing. Computer Guy was very taken with When Rain Falls by Melissa Stewart and got a copy for a family member. 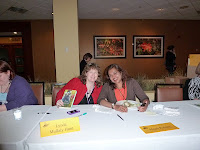 Then, who do we see but Lynda Mullaly Hunt, doing her second signing for her debut book? I was quite at a loss at what to talk to her about, since we usually meet at Stop & Shop. So I took her picture, along with Mitali Perkins, who was also signing today. Computer Guy already knows Lynda and felt as if he knew Mitali since he is this blog's keeper, and over the years Mitali has been mentioned or commented here.

Finally, we finished up the day with a research session conducted by Ann Malaspina and Joan Axelrod-Contrada.  They said something interesting about managing time, so I'm going to be contacting them to see if they'll elaborate on that for a Time Management Tuesday post.

CG says he'll go back to the conference next year, but only if they have another session relating to computer code. It could happen.

Hi Gail! Glad Computer Guy enjoyed the workshop. I'm planning a proposal for next year's conference, so their could indeed be another session on code!

I hope I can be most charming and gracious and be pleased to finally meet you in person after wondering why our paths hadn’t crossed at children's-book events already after so many years of online exchanges. Thanks for introducing yourself on Sunday! Next year?

Since the conference is going to be in Springfield again next year, I may very well be back for a day. If CG goes back for another session with Brendan relating to code, I may send him in there by himself, though.