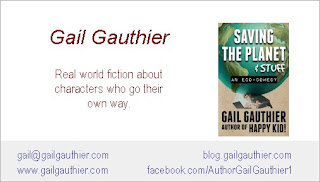 In last week's comments, David Elzey raised the question of self-published eBook writers using business cards at appearances, because otherwise they won't have anything material to show potential readers. My response included the news that business cards are the only real-world promotional items--the kinds that are created, touched, and thrown away--I plan to use for Saving the Planet & Stuff.

During the years that I've been publishing books, marketing materials have increased dramatically. In days of old, you were talking a bookmark, maybe a post card. Now you see pins, cups, pens, pencils, and shirts. Bumper stickers, mouse pads, and key chains. Lip balm. I heard that rolls of toilet paper were sent to bookstores to promote Walter the Farting Dog. Evidently whoopee cushions went out, too.

Some of these things are more utilitarian than others. It seems as if some of them would get a little use before making the trip to a transfer station. But we are talking material items here that are being created not for functionality but to get attention, and they will, indeed, one day end up in a transfer station. Or, in the case of the Walter the Farting Dog T.P., maybe a septic system of some kind. But given that to this day everything I read about bookselling and marketing suggests that the publishing world doesn't have a clue what sells books, it seems to me that bling is generating trash for nothing. Note that in this 2012 post at Meghan Ward's Writerland, not a soul she quoted said, "A key chain put me over the top!"

Given the futility of it all, it seems very inappropriate for me to be generating this kind of trash for a book in which a main character actually voices her frustration with people squandering resources on promotional items. It would be a hypocritical act (of some kind) for which I believe I'd have nothing to gain.

Now, this is not to say I haven't done my share of producing marketing trash in my day. I've been personally responsible for creating and distributing thousands of bookmarks to elementary school students. I always had them made on the cheap at Kinko's because, being an experienced mom, I knew what was going to happen to them. Some other experienced parent was going to find them at the bottom of a backpack weeks later, if the recipients didn't toss them themselves. I would be surprised...no, stunned...if any of those bookmarks generated one sale for me. I got a kick out of signing them all in the evenings before my appearances and giving them out, but the reality is, that's the extent of what I got from them.

I've also done postcards in years past and even mailed out some of them with all kinds of info on the back to booksellers. However, even ten years ago I was hearing from more experienced writers that that was a waste of energy (not so much talk of resources) because booksellers are buried in promotional materials such as postcards. You've got to send them something really unusual--say that toilet paper for Walter the Farting Dog--before those poor people will be able to lift their heads up over the heaps of stuff in their offices and take notice.

Refusing to create bling isn't a big stand for me to take because Saving the Planet & Stuff is now an eBook. Booksellers aren't involved so there's no one to send postcards to, even if I believed that would do any good. And you don't use bookmarks with eBooks. On the other hand, I may be shooting myself in the foot by not making some of this other cr-- junk because being able to offer bloggers bling to give away through their blogs might get me more attention there. But, once again, any evidence that blog reviews really sell books? I'm not aware of any.

So, for now, I'm sticking to distributing business cards when I want to distribute something. Why use even those? Because I keep business cards on hand, anyway. I don't have many opportunities to give many away. I don't know anyone in any field who does. But they're something I keep around, with one book cover or another on them, and something I can use in a number of situations, not just for marketing one book.

I think they're a better use of resources than, say, Saving the Planet & Stuff pot holders.
Posted by Gail Gauthier at 8:15 PM
Email ThisBlogThis!Share to TwitterShare to FacebookShare to Pinterest
Labels: environment, Marketing, Saving the Planet eBook