Time Management Tuesday: Managing The Beast That Is Twitter With Tweetdeck, Part 2

Last week I covered how-to related to Tweetdeck. This week I'll describe some of what I've been doing with Tweetdeck to make better use of time, to give you an idea of what you can try.


What You Can Do: There are thousands of tweets out there in the twitterverse, more than anyone can absorb. Any individual tweet we send out there has to compete with all those others. Most people using Twitter look at the tweets on the screen in front of them, maybe scroll down a bit. If you post each tweet only once, the odds of it being seen by many people are not great. Tweeting the same material a few times over the course of the day or even several days means you can reach more people. But who has time for that? 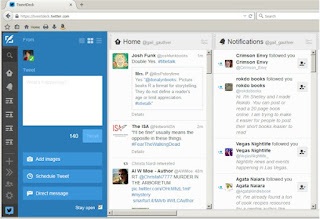 What you can do with Tweetdeck is schedule tweets so they are automatically tweeted while you're doing other things. Yeah, writing, of course. On your Tweetdeck page you'll see a blue column to your left. The white box in it is for typing your tweet in. You can immediately tweet it by pushing the "Tweet" box below it. Or you can look down at the next three buttons. One of them says "Schedule Tweets." Yes. That's the one you want. 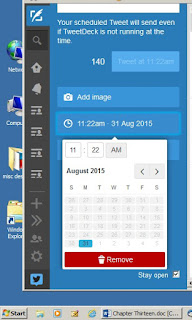 The blue column has its own narrow scroll bar. I mention that because, yes, I struggled with scrolling there for a bit. So once you've chosen the "Schedule Tweet" box, use the scroll bar to move down a bit to a calendar and squares with the time. You can hit the day and fill in the time you want your tweet to show up. Look above the calendar, and you'll see a box that says "Tweet at...whatever you told it to do." Hit that box. You'll find the tweet you just scheduled has moved to a column called--surprise!--"Scheduled."

Then you can do that again. And again.

What I've Been Doing: I usually do my first tweet in real time shortly before noon. Then I schedule at least two more that day, around two and four. I've read that noon and late afternoon are best tweeting times. People go onto Twitter at lunch time and after work. I'll change the write-up I use with each tweet so I'm not tweeting exactly the same thing, even though I'm tweeting exactly the same link. I may use different #hashtags to get the attention of different groups.

That strategy definitely increases traffic to my blog. I get a lot more views days I do that type of tweeting.

If you blog in the evening to save your daytime for other kinds of work, you can schedule your tweets for the next day.

Increasing The Odds Of Your Tweets Being Seen By Using Images

What You Can Do: Images attract attention on every platform. They're mind-bogglingly simple to do with Tweetdeck. The button for adding images is below your white text box, just as the scheduling tweet box is. You can use it to add any images you have on your hard drive, the ones you've used in your blog. Basically, if you can add images to your blog, you can add them to your tweets with Tweetdeck.

What I've Been Doing: When I tweet a reader response post, I add the cover image to my tweet. I'm going to experiment with other images from the blog as well

What I've Been Doing With My Columns

#hashtags: I got started with Tweetdeck because my nephew told me following hashtags had helped him build his Twitter following. I haven't had much luck with that. I may not be spending enough time going through the columns to look for people. I'm mostly scanning for interesting content at this point. The first two hashtags I followed, #kidlit and #YA, turned up a lot of tweets from authors promoting their own work. That's not particularly interesting content. Fortunately, it's very easy to get rid of columns. At the top of each one, there's a strange little two-line icon. Hit it, and you'll find "Remove" down at the bottom. I got rid of my #kidlit and #YA columns.

Now I have columns for #timemanagement, #Egyptology, and #MSWL, among other things. I think it's obvious why I'm interested in seeing time management tweets. (This is a Time Management Tuesday post, recall.) I'm following Egyptology because of that mummy book I'm working on. When I see something interesting there, I retweet it. My goal with that is to let my followers know that Egyptology is something I'm interested in. If that book ever gets published, I will have a little history with ancient Egypt. In fact, a couple of times my #egyptology retweets have been picked up in an Egyptology on-line publication that collects tweets on that subject.  The MSWL column is for "Manuscript Wish List," something agents and editors tweet periodically on twitter. I was not able to spend any time following that the day they did it this summer, so I created a column to collect those tweets, so I can look at them another time.

What I'm doing so far is using hashtags to pull subjects I'm interested in out of the flood of tweets. I've been able to do a lot more with this information than if I'd been hoping to see it racing by my screen all in one stream.

Lists. Whenever I follow new people/organizations on Twitter, I immediately add them to a list. We're talking agents, publications, writers, things like that. If you go back to the screen of options, you'll see that you can make a column with your lists. It's incredibly easy to do. List columns are another way to pull information out of your Twitter stream and put it somewhere you might actually see it.

The lists have been great. I have a list of publications I'm interested in. Earlier this month, one of them tweeted that it was opening for submissions for a couple of weeks. So I submitted. I have a list column of Connecticut writers. One of them tweeted that she's interested in hosting guest bloggers this fall. I've made a first contact regarding that.

Flexibility. Because columns are so easy to make and delete I can change them depending on my needs and interests. Oh, wow. That makes them situational, doesn't it? You can adapt them to whatever your situation is at any particular moment.

I could keep him busy for hours every week.