Time Management Tuesday: Did I Waste Weeks Of Summer Evenings On Pinterest?

I've written here before about the time issues involved with social media. Yes, social media is important for marketing writers' work and for marketing themselves. It can keep your name alive between publications. But it's important to remember that you don't want to be spending more time marketing your work then you do on creating it. That's particularly important to keep in mind as new social media platforms are created. We should have a logical reason for jumping to something new, a logical justification for the time we're spending learning how to use the new platform and then maintaining it. 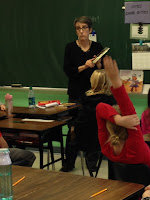 An entire year ago, the artist who did the cover illustration and design for the Saving the Planet & Stuff  eBook told me I should be in Instagram. He suggested I build a presence around my author appearances. In addition to being an artist, he was then working at an advertising agency in New York. He was a mad man, as a family member said. We're not talking one of the neighbors raving about Instagram. I began to feel enticed.

It took  nine or ten months to get fully there, though. What little I knew about Instagram suggested that it is all about images, making it different from the other social media platforms I use that are primarily about text. Even Twitter is built around text--very little text, but text nonetheless. Images are important for blogging, Facebook, Google+, and Twitter because the images attract people to your text. But IF I understood Instagram, image came first there.

That would make Instagram different from other social media I use.

But would Instagram be a way for an author to reach a new group of people, people who are interested in image first? I liked the idea of using pictures from author appearances in some way, and I also had an idea for using photographs from the author homes I like to visit and have written about here. And could I link blog posts to Instagram, drawing new people to the blog? To me?


I was pretty psyched for this Instagram thing until I actually looked at it. It just appears to be a mass of pictures. I may be wrong about that, of course, but there was a bigger issue. My reading and questioning indicated that you post to Instagram from smartphones. That would have been fine for the future, but I wanted to use pictures stored on my hard drive. There was probably a way to manage the job, but there was a limit to how much time I wanted to commit to this job.

Time. If this couldn't be easy and fast, I didn't think I should be doing it.

But by that point, I was really pumped for doing something with my literary tourism pictures. I can't remember what made me think of Pinterest, which I believed to be image heavy.


Okay, so I looked into Pinterest. The two issues I considered:
Well, I haven't been able to find much about writers using it for marketing, and I wasn't able find many writers there. But I was able to figure out how to use it. And, it turns out, there is a curation aspect to Pinterest that attracts me.

So for many, many evenings this summer I played with Pinterest. I spent a lot of time on this shiny, new thing. 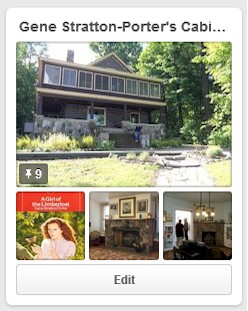 
So what I'm doing on Pinterest, besides looking up recipes and weird historical boards, is pulling content out of my 14 years of blog posts and repurposing it on Pinterest boards. The Gene Stratton-Porter's Cabin board you see here is an example. These literary tourism boards are made up of photographs, but there's also one pin from my blog. Thus the littourism boards do have the potential to draw, or drive, people here to Original Content and, thus, to me.(Yeah. I am the blog.)

Here is a key thing with Pinterest and me--pinning my blog posts is easy. Look down to the end of this post. You'll see a row of icons representing various social media platforms. My posts can be shared with any of them. And, yes, they can be pinned to a Pinterest board.

Once I realized how easy it is to do that, I began thinking of all kinds of Pinterest boards to make with my blog content.
All I need is blog posts with images and an organizing theme.  I can go on and on with this!


Well, there's the time management question. Am I going to get any bang for my time spent? For Pinterest to work for me, it will have to promote me, just as this blog promotes me. However, because there are now so many, many blogs, I have to promote it to attract attention. I expect to have to do the same for Pinterest.

Let me repeat that in bold:

I'm gambling here, people. While I'm gambling with my time, you'll be seeing Pinterest boards here from time to time. Hey, they'll be images for the blog, right?

This is why I don't care for casinos. I do enough gambling with my life, thank you very much.