Janet Lawler Brings The Games To Connecticut, Not Rio 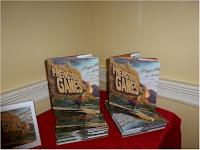 Author Janet Lawler brought a program developed around her book, The Prehistoric Games, to the Cragin Memorial Library this evening. It was an impressive event that included a traditional reading and PowerPoint presentation related to how Janet came to write the book. And then there was everything else.


We're talking an Olympic torch, a parade of athletes, and an array of games for child audience members to play. And they did. At length. The dino dig and long jump were particularly popular, but there were more things to do. The evening concluded with a medal ceremony.

What Janet has created for The Prehistoric Games is a fine example of what Kirsten Cappy of Curious City discussed at a NESCBWI program last month. Janet is marketing her book by providing the adults in children's lives (librarians and parents this evening) with engaging materials for those children.

Coming soon to Janet Lawler's website: How to use The Prehistoric Games as part of a birthday party.

When we engage, we connect. When kids connect, they READ!

What I find interesting about this type of marketing is that it gets away from the blingy thing--purchasing and handing out material stuff. I've probably given away a few thousand bookmarks at schools. If they were effective, I sure couldn't tell. As beautiful and creative as a lot of the materials being made now are, I just don't know how often they generate a sale or a trip to the library. There's also an overwhelming amount of these things out there, which I'm guessing cuts down on the effectiveness of any individual item.

Focusing on engagement and connection at least means someone is truly doing something with the book with a group of readers. And then you have a chance for a ripple effect and true word-of-mouth, which I don't think you often get from trinkets.