While I was on retreat last week, I did a lot of reading. Cybils spec fiction. A Poets & Writers.  Some Yoga Journals. A couple of Vermont Lifes. The most recent issue of 7 Days. Half a Carve Magazine. Got started on The Man in the High Castle, which I got at my retreat week indie bookstore.

But today's post is about a couple of picture books I brought with me, primarily because we had a four-year-old family member with us. I have a long history of "shopping" for books for family members. Over the years, I've registered a lot of hits. I'm thinking all those YA humor books for one YA. The adult mystery series for another. The hip books of essays for a daughter-in-law.

So what about the books I brought on retreat last week for a family member?

The Little Snowplow by Lora Koehler with illustrations by Jake Parker. I picked this book because our four-year-old is into things like trucks, race cars, and trains. This isn't the first truck book I've latched on to these last few years, which I want credit for. I may have mentioned here before that I don't get the truck, race car, and train thing. Dinosaurs, I get. Curious George, I get.

This is not a gender issue, by the way. I don't get princesses, either. Princesses actually annoy me. At least trucks, race cars, and trains are not annoying. They're just mystifying.

The little snowplow, of course, isn't a truck. It's a little snowplow in a world of big trucks. The Little Snowplow is a classic story of a little guy who trains and prepares and comes through in a pinch, in large part because he is little. Lovely story with a Beep, Beep for little ones to...beep. 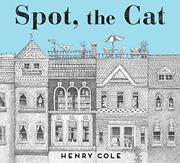 I picked up Spot, the Cat by Henry Cole because I'd heard that our picture book reader is into those "hunt for things in pictures" books. Yeah, that's another thing I don't really understand. In fact, after looking at the first few pages of this thing, I thought, I hope he can spot the cat from this point on, because I sure can't.

Well, he could. Pretty soon, so could I. In large because this isn't a random Where's Waldo type of book. There is a narrative here that's told totally in pictures. A boy's cat goes out the window, has adventures while the boy looks for him, and eventually comes back home.

We developed a "Found that cat!" sing-song as we thumbed through this, and before long our guy was "reading" the book by himself, including the wordless story about the cat's boy. One morning I stayed in bed and could hear him in the living room, going "Found that cat! Found that cat! Boy sad. Boy makes signs. Found that cat. Cat comes home."

When it comes to picking out books for others, I've still got it. Not that I'm bragging or anything.