A Throw Back Thursday Post For Black History Month

Back in 2015 I did a post on Vaunda Micheaux Nelson's Bad News for Outlaws: The Remarkable Life of Bass Reeves, Deputy U.S. Marshall, which was published in 2009. I'm republishing it below as a Black History Month observance.

I happened to recall this book recently because last week the television show Timeless featured Reeves in an episode. Timeless is a time travel story, a genre I'm not that fond of as a general rule. In this one, the main characters go to a different time every episode chasing a bad guy who's doing something I don't quite understand and there are some other bad guys I don't get at all. But here's what I do get about Timeless. It's a show for history geeks. It's a show for those of us who sit on our couches watching it and shout, "That's Judith Exner! Judith Exner! That's Kennedy's mistress!" "Oh, you know, there was a serial murderer at the Chicago World's Fair and look how cool Houdini is in this episode." "Bass Reeves? I know him."


The Bass Reeves' episode was actually called, The Assassination of Jesse James. But the character of Bass Reeves, and the actor who played him, left me thinking, Jesse Who?

Something happens when a genre show aimed at a general audience features lesser known historical figures like Reeves. The show places those figures into popular culture where lots more living people have a chance to hear about them. It takes them out of their niche--Black history, say, or western history--and places them into history with a capital H. It gives them their shot at being remembered for what they did. 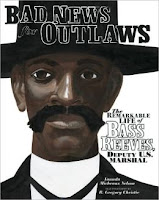 I was so taken with Vaunda Micheaux Nelson's article Mind the Gaps in The Horn Book last winter that I went on to read her book Bad News for Outlaws: The Remarkable Life of Bass Reeves, Deputy U.S. Marshal. Like Nelson, I grew up watching westerns, so I had noticed a review for this book when it was released in 2009.

Bad News for Outlaws is a fantastic book. It's marketed to grades 3 to 6, so expect more text than in a traditional picture book. It is fascinating text, well-constructed as Bass Reeves' life story. The Reeves' story is told within the context of his world, as well. Just what was the deal with the so-called Indian Territory, anyway? And what were the deputy marshals vs. any other kind of lawman out in the west? Additionally, Nelson uses some great stories about Reeves' activities as a marshal to illustrate what was so interesting about him. And she subtly throws in language from Reeves' era.

In addition to the great writing, this is a beautiful looking book, illustrated by R. Gregory Christie. The design of many of the pages calls to mind old books or maybe wanted posters. The back material is some of the best and most inviting I can recall seeing.

Because Bass Reeves was an African American, I imagine Bad News for Outlaws being displayed prominently in libraries during Black History Month. But this is a book that could be used for so much more. It could support history units because it is so good on the time period when Reeves' lived. It could be used to support a writing unit with the the stories Nelson uses about Reeves lives illustrating use of detail in writing. Oh, and the book also illustrates using an opening hook.

I learned from this book. I was left wondering about one thing, though. Was poor pretty Jennie Reeves left raising Bass's eleven children on her own while he was off taming the Wild West? But then I wonder about that with many books about men from the past.

Photo of Colman Domingo as Bass Reeves from A.V. Club.