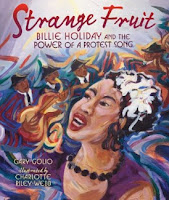 I'm giving away another nonfiction picture book this month, this one Strange Fruit: Billie Holiday and the Power of a Protest Song by Gary Golio with illustrations by Charlotte Riley-Webb. You'll find details at the end of this post about how to enter for a chance at my copy.


The "strange fruit" in the title refers to the bodies of black men left in trees after having been lynched. It's the name and subject matter of a song singer Billie Holiday first performed in 1939. "Southern trees bear a strange fruit...Black body swinging in the Southern breeze." Grim subject matter for a book its publisher is marketing for ages 8 to 12?

Check out the title of the book again. "Billie Holiday and the Power of a Protest Song." The book really is about Holiday and the song, Strange Fruit. Lynching is mentioned very briefly in the text and at greater length in material at the back of the book. But Strange Fruit the picture book is about Holiday's life up to the point at which she is offered the opportunity to sing Strange Fruit the song, a piece she wasn't all that taken with at first. A song that ended up having great significance.

A song, by the way, that I'd never heard of until I saw this book. I don't know how I missed it. Holiday's version is in the Grammy Hall of Fame and the Recording Industry of America and the National Endowment for the Arts named it a Song of the Century. Today you can still listen to Billie Holiday, herself, sing it. You can hear an extensive number of cover versions. I listened to these before I read the picture book  and enjoyed imagining white patrons in a club slowly recognizing what the song is about. (Strange Fruit: The First Great Protest Song in The Guardian deals with that very situation.)  I've recently learned that the composer of the song, Abel Meeropol, became the adoptive father to Ethel and Julius Rosenberg's sons after their parents were executed. That has nothing to do with Strange Fruit, of course, but it totally blew me away.

By the way, author Gary Golio has a little bit to say about jazz and jazz singers in this book. Very helpful for those of us who aren't terribly knowledgeable about that subject.


We're going to do something different this month. You can enter to win Strange Fruit two ways:
At the end of May, I'll collect all the comments and new follows, assign everyone a number, and draw a winner.

Remember, if when you comment here your name in the comment doesn't link back to an e-mail so I can contact you, I won't be able to let you know you won. (I should be able to reach you if you enter by following me on Twitter.) So check Original Content the beginning of next month to see what happened. If I can't contact the winner, and don't her from him/her in a week, I'll draw another name.

FTC Transparency Info: I received a copy of this book from the publisher.

I was lucky enough to win a book last time aroung Gail, so thank you! But I just wanted to say that the art for this book looks AMAZING! I am looking forward to reading it, since I liked his Jimi Hendrix PB too.