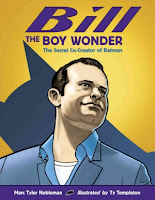 Nearly two years ago, I heard Marc Tyler Nobleman speak about his book Bill the Boy Wonder, the story of Bill Finger, who was instrumental in creating Batman but never received credit for his work. This is the only book on Finger.

Now Hulu has made its first original documentary, Batman & Bill. It's also the first documentary based on a nonfiction book for young readers, Bill the Boy Wonder. Nobleman figures prominently in the terrific trailer.

The film was just released last weekend and has received a lot of media attention. Check out SyfyWire's interview with the film makers for information on children's author Nobleman's connection with the project.
Posted by Gail Gauthier at 6:27 PM
Email ThisBlogThis!Share to TwitterShare to FacebookShare to Pinterest
Labels: Marc Tyler Nobleman, nonfiction

I saw this! Definitely have to take a look, especially since I grew up not far from Cleveland! Marc's a great guy.

Our Internet access is too lousy to allow us to watch anything streaming, so I'll have to hope this is released some day as a rental.