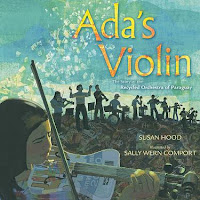 Ada's Violin by Susan Hood with illustrations by Sally Wern Comport is one of the best environmental books for kids that I've run across. It's also a great example of creative nonfiction. Seriously, I thought I was reading a novel for a while, the storytelling aspect of the book is that good. (Clearly I missed the subtitle on the cover, The Story of the Recycled Orchestra of Paraguay.) I've seen Ada's Violin mentioned this past year, but I had no idea what it was about. Then I saw it on The Green Earth Book Award short list. An example of an award bringing readers to a book. In my humble opinion, that's a major function of awards. The whole awarding part...eh.

Okay, so what is Ada's Violin about? "Ada Rios grew up in a town made of trash." Her family works for the landfill where recyclers pick through the garbage, looking for cardboard and plastic they can sell for five or ten cents a pound. Not a bright and cheery situation, but this isn't a grim story. Ada and her grandmother are interested in music, and grandma signs her up for music lessons. Ada decides she'll learn the violin, but there aren't enough instruments for all the kids who want to play.

So the music teacher gets together with a carpenter and a few other guys who find some stuff in the landfill and tinker with it and create a recycled orchestra. For real.

Hmm. I need to remember to use this book as an example in a workshop I do.
Posted by Gail Gauthier at 7:37 PM
Email ThisBlogThis!Share to TwitterShare to FacebookShare to Pinterest
Labels: 2016, Environmental Book Club, nonfiction, Picture books, Reader response, Susan Hood