Today's ReFoReMo post by Kirsti Call is about fresh concepts, particularly those that are created by combining the expected with the unexpected. Once again, I was able to find only two of the books selected to support the post. 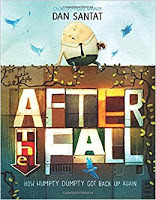 The unique concept in After the Fall: How Humpty Dumpty Got Back Up Again by Dan Santat is that it deals with Humpty Dumpty's recovering from his fall from the wall instead of the fall itself. It combines the expected--the Humpty Dumpty story--with, I guess you could say, recovery literature. It also has a surprise at the end. A beautiful looking book with a sincere story. 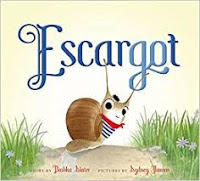 To be honest, Escargot by Dashka Slater with illustrations by Sydney Hanson is more my speed. Though I'm having a hard time thinking of a way to describe it, particularly in terms of a fresh concept. I mean, it is a fresh concept--a French snail in love with himself and determined that readers will love him, too. Is it created by combining the expected with the unexpected? Well, the French accent was unexpected. The attitude/voice was unexpected. The story was unexpected. I don't know what was expected here.

So I am thinking that maybe I can pump up my picture book's narrator with voice, though not a French accent.