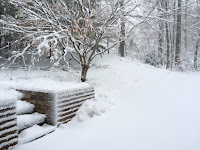 Yes, I am a day off again with my Reading For Research Month material. We're in the midst of another snowstorm here in the northeast, and I spent half of yesterday cooking what was in my fridge in case the power goes out again today. Then there was writers' group last night, which is when I usually blog. Please, April, please come soon so I'll be done with this project. Waily, waily.

So yesterday's post by Matthew Winner was on strong beginnings and endings. Personally, I love parallel construction, and I like endings that mirror beginnings in some way or loop back to them somehow. That, to me, is a strong ending. Or, if we're talking about a story where the character experiences a change (and I know some people would say that that should happen in all stories), I like to see that expressed in some strong yet still subtle way at the end. 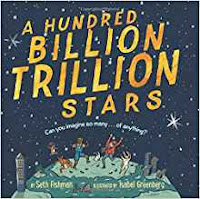 Of the four books I read, A Hundred Billion Trillion Stars by Seth Fishman with illustrations by Isabel Greenberg is the one that I think illustrates a strong beginning and ending the best. "Let me tell you a secret" is the first sentence, the only one on the first page. That's a strong beginning. I don't actually want to give away the strong ending. This is also a good example of second-person point-of-view. (See Day 7.)  I am not a number person, so I'm not the best reader for this book. Nonetheless, I very much admire the concept here. 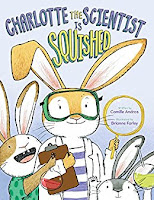 Charlotte The Scientist Is Squished by Camille Andros with illustrations by Brianne Farley is a neat introduction to the scientific method. (I tend to like anthropomorphic rabbits.) The author is walking a tightrope, trying to do a how-to on experiments within a story. So, yes, I guess the ending does hit strong, given that it manages to stick to the story. 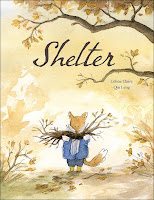 Well, now, on second reading I've decided that Shelter by Celine Claire with illustrations by Qin Leng does have a strong beginning and ending. This is what I would call an improving text, something I don't usually care for. But this French import is lovely. 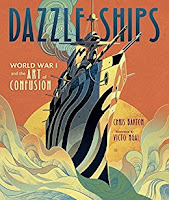 I read Dazzle Ships: World War I and the Art of Confusion by Chris Barton with illustrations by Victor Ngai a few weeks ago. I no longer have it, so I can't address the strong beginning and ending issue. The book is a neat example of finding a semi-forgotten historical event and featuring it in a piece of nonfiction, however. We mentioned Dazzle Ships last night at my writers' group.


Can I use a strong beginning and ending with my picture book manuscript? I certainly hope so.