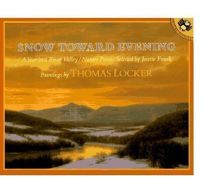 I am sure you recall that last weekend I went on a writing retreat where I read some nature poetry. Well, I've read some more. I'm rather liking this stuff.

I picked up the picture book Snow Toward Evening: A Year in a River Valley (illustrations by Thomas Locker and poetry selected by Josette Frank) at a library without giving it a lot of thought. When I sat down to read it, I wasn't expecting much. I am not much of a poetry reader, have little knowledge of it, and it's not something I have much experience of.

Why, I may be much like a child reader in those ways.

I was taken with Snow Toward Evening immediately. The first poem, January by John Updike (Updike! Never got into him, either.) begins "The days are short,/The sun a spark/Hung thin between/The dark and dark." How is that for an image?

There are only twelve poems here, one for each month of the year, with a nature/landscape illustration. The poetry isn't children's poetry (Updike!), though it is very accessible. (Hey, I liked it.) The book functions:

Unfortunately, you're going to have a hard time finding Snow Toward Evening. It was published in 1990 and is out-of-print. Way out-of-print, presumably. Both the illustrator and compiler are dead, and it looks as if finding some good used editions could take a little effort. Personally, I'm suggesting this as a gift some family member can make the effort to find for me.

By the way, the book title comes from the poem Snow Toward Evening by Melville Cane, which is included in this collection.
Posted by Gail Gauthier at 1:13 PM
Email ThisBlogThis!Share to TwitterShare to FacebookShare to Pinterest
Labels: 1990, Environmental Book Club, nature poetry, nature writing, Poetry