Finchosaurus by Gail Donovan is what's known as a quiet book, in this case, a quiet book about a very realistic child in a realistic child situation. Finch is obsessed with dinosaurs. His knowledge of those creatures defines him. He develops a new obsession when he discovers a tiny note in his fifth-grade classroom's garden.

Finch sets to work to find out who wrote it. Who needs help, and how can Finch help him or her? This is his goal, and he takes steps to reach it. He tries to keep what he's doing to himself so that no one can take this new project from him, but slowly more and more people find out and become drawn into his plan. I must say, I didn't see the ending of this carefully plotted mini-mystery coming. But it definitely works.

One of the things Donovan does very well here is stick to her basic premise. Finch's inability to sit still and his grandparents who are downsizing because one of them is ill, are not pile-on problems that draw readers away from the initial story issues. Finch's fidgets and concerns about where he and his family will stay when they go to visit Guppy and Gammy in the future are not obstacles to be solved or random tangents but a way of creating a world for him.

I can imagine Finchosaurus being used as a classroom read-aloud and initiating "what-would-you-do?" discussions.

A field trip to something called Dinosaur State Park figures in this story. Though it sounds like a made-up name, Dinosaur State Park is a real place in Connecticut. This book so rooted in reality uses a real park. I happened to be there a couple of years ago. I do not know why I didn't take any pictures of the good stuff. I was taking part in a Connecticut DEEP Challenge, 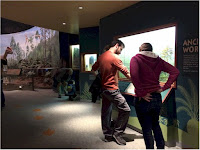 which is why I had my picture taken in front of the sign. I had to prove I'd been there.


FTC Disclosure: Gail Donovan is a NESCBWI colleague. I won my Finchosaurus uncorrected galley in a blog contest.