Connecticut Book Fair 2018--Some Of Those Who Were There 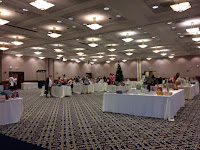 I was off to the Connecticut Children's Book Fair yesterday afternoon for the first time in three years. In the past, the Book Fair raised funds for the Northeast Children's Literature Collection at UConn's Dodd Research Center, though I'm not sure if that's the case, anymore.

My excursion will, of course, initiate a series of blog posts. Today we'll begin with the Connecticut children's writers I talked to who were doing signings yesterday afternoon (There were others, like Barbara McClintock, I didn't get a chance to speak with.) and a couple of random thoughts. 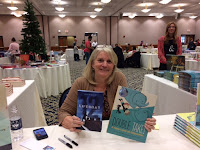 The first person I met was Susan Hood. And I mean I literally met her. We had only corresponded by e-mail. Susan won the Connecticut Book Award this year in the Young Readers Juvenile division for Double Take! She's also the author of Ada's Violin, which I liked a great deal. 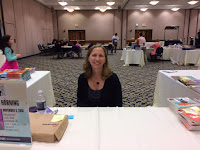 I just missed Sandra Horning's presentation this year, though I caught her back in 2015. I did catch up with her during her signing today. Her most recent book is Baby Code. I apologize for forgetting to have her hold it up. 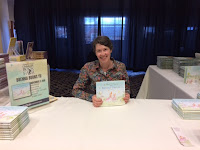 I also met Brenna Burns Yu for the first time. I wanted to connect with her because she's the debut author and illustrator of Hazel and Twig The Birthday Fortune, which won the Tassy Walden Award for New Voices in Children's Literature while still in manuscript form.  (I don't know which year.) The Tassy Walden is a Connecticut award and a number of winners and finalists have gone on to publication. So Brenna is part of a Connecticut literary circle. 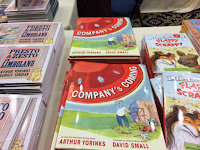 Arthur Yorinks was originally scheduled to attend this year's fair. He couldn't make it, but some of his books were offered, including  a beautiful stack of Company's Coming, which my beloved followers know, I'm sure, is a very important book to me. It even became part of a baby shower in our family. What's more there was another stack of Company's Going, Yorinks' follow-up book. I got pretty excited about this, because I thought both books were out-of- print. Which they may have been, and now they're back. 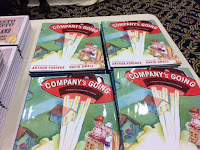 David Small illustrated both these books.
Yorinks wasn't the only person missing from the Book Fair yesterday. I used to know one or two booksellers involved with the Fair, but a new store is running it, so my contacts are gone. I used to sometimes see an archivist from the Northeast Children's Literature Collection there, but she's retired and moved away.

I was very happy to see Billie Levy there, though, who is a major presence in Connecticut children's literature. How big a presence is she? My husband, a civil engineer, asked me last night if Miss Billie had been at the Fair. She is a children's book collector whose 8,000 piece donation got the Northeast Children's Literature Collection off and running. And then she continued to collect more. I've been seeing Billie at UConn children's lit events for years. Billie was there, so all was right with the Connecticut childlit world yesterday.

Over the next few days I'll be covering the three discussions I attended.