This year I was looking for something specific at the Connecticut Children's Book Fair. I wanted to hear from authors who write for younger readers, maybe chapter books. I have a picture book manuscript out and about and after corresponding with one editor about it, I began to think about turning it into something chapter-bookish. A lot of the writers covered two age groups, and there was no way of predicting which one they'd be speaking about. Many of the speakers were both authors and illustrators, and there was no way of predicting which their talk would be about. On top of those considerations, I had to pick out people who were speaking around the same time, because I didn't want to stay there all day or end up going twice.

So you know the careful thought that went into planning my trip.

The first speaker I saw was Steve Light, an author/illustrator I hadn't heard of before, though I suspect I'll be hearing a lot about him in the future. 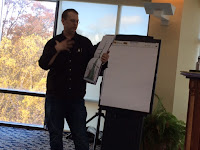 I was particularly taken with Steve's book Builders and Breakers. It's one of the most attractive construction books I've seen. The blueprint endpapers...the finely drawn (with fountain pens?) double spread...the story that begins on the title page, making use of every part of the book. Builders and Breakers has been recognized by the Society of Illustrators and a two-page spread of Steve's original art for the book will be included in its 2018 Featured Artists Exhibit.

So I bought two copies for young family members. 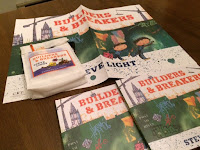 I am not a fan of book bling and marketing swag. Melissa Stewart was quoted in a SCBWI article last year saying that creating swag is a waste of natural resources. My issue is the other end of the bling life cycle. Creating swag is just generating trash. I've signed hundreds of bookmarks that I knew were going to be balled up at the bottom of backpacks and tossed out by parents at the end of the week. (Whoops. Did I just let slip that I only cleaned my kids' backpacks on Fridays?)

Nonetheless, I have to say, Steve Light had some incredible book swag for Builders and Makers last weekend. In addition to a lovely poster version of the book jacket, he was giving out cloth bags with rulers and pencils all stamped with the book's, author's, and publisher's names. And a little notebook, maybe a lot like the one he uses for his inspiration books. This is useful stuff! Great stuff!

I took a set for a Christmas present for another child. It will be a little while before this treasure stash ends up in a landfill.
Posted by Gail Gauthier at 9:37 PM
Email ThisBlogThis!Share to TwitterShare to FacebookShare to Pinterest
Labels: #CTchildlit, book fairs, Connecticut Children's Book Fair, Picture books, Steve Light