Finally Read One Of My Christmas Books 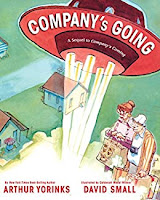 Last year I asked for and received a copy of Company's Going by Arthur Yorinks with illustrations by David Small. It looks as if it was a 2001 publication that was rereleased in 2018. I finally read it a couple of weeks ago, because, you know, reading a picture book is so much effort. 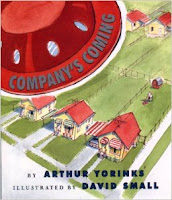 I'm sorry to have missed Company's Going the first time it was published, because it's a sequel to Company's Coming, which also appears to have been rereleased in 2018. Company's Coming had a huge impact on my life, as I explained in a 2015 OC post. Basically, what happened was:

So, yes, big deal for Gail.

Company's Going picks up with the same characters from Company's Coming, except now Moe and Shirley's alien guests are so taken with Shirley's cooking that they invite her to cater a wedding back on their home world. It's just as terrific as the first book.

Interesting point: My Life Among the Aliens also had a sequel, Club Earth. Both books were a series of stories about Will and Rob, whose mom's over-the-top healthy cooking attracts aliens. In their case, though, the aliens came to them.

Another interesting point: Both the Company books are examples of picture books with no human characters and no animals characters filling in for humans. I don't see that a lot.

Both of what I call the Will and Rob books have human characters. And aliens, of course.