There are Hundreds of Stories in the Book Jungle

Yesterday I wrote about Teach Me by R. A. Nelson. Teach Me was discussed as part of The Great Blog Experiment. Nadia Cornier, the person behind the experiment, wanted to see if bloggers blogging about a specific title could increase sales.

I'm having trouble telling if The Great Blog Experiment site saw any action after the end of December or what the results of the experiment were.

Anyway, Teach Me was published by The Penguin Group (My publisher, G. P. Putnam's Sons is part of The Penguin Group.) and was reviewed in at least a couple of the usual places. It also got a review at teenreads.com. It's had some blog attention and maybe other attention, too. That's just the stuff that was easy to find. 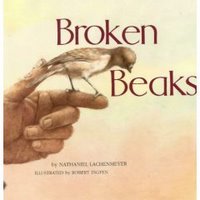 Nathaniel Lachenmeyer is a U.S. writer who published an adult book, The Outsider, in this country. With Random House, in case you didn't follow the link. He, himself, sold the Australian rights to The Outsider to Michelle Anderson Publishing. Agents or, as in my case, publishers usually sell foreign rights to books.

Everything worked. Anderson accepted the book and Ingpen illustrated it. Foreign rights were sold to Korea and Brazil.

Then they start looking for an American publisher so they can sell American rights. Though they received complimentary comments from editors and publishers, this isn't a great time for the picture book market (I've mentioned that here before) and the subject matter (homelessness) wasn't considered an easy sell.

So, the Australian publisher decides to look for someone to distribute the book here, while it remained the publisher. It found a Canadian distributor to distribute an Australian book written by an American writer in the U.S.

Are you following this?

The Australian publisher doesn't have the means to easily contact U.S. reviewers from Australia. So reviewers may not know about the book in order to review it. The distributor is contacing booksellers, not reviewers. Therefore, booksellers may not have heard of the book through the usual review publications.

So while Broken Beaks' author has a history with good publishers, his book may not get the normal attention that R. A. Nelson's debut book received. And we don't even know what kinds of results "normal attention" gets a book.

This is why books that sell a lot of copies get so much attention from the press.
It's just so very difficult to sell books that people are stunned when it happens.

A February Update: Reviews for Broken Beaks have started making their way into general publications.
Posted by Gail Gauthier at 2:45 PM
Email ThisBlogThis!Share to TwitterShare to FacebookShare to Pinterest

I like to buy lindens, because it is very interesting. I think if you meet the second life linden, you will like it too. And when you play the game well you can get some cheap linden as the rewards from the game. As long as you have a lot of linden dollars in the game you will be strong, and you can exchange the secondlife money with the other players.