My Conference Experience II: The Armpit of Bread Loaf

I've heard that it's difficult to get into the Bread Loaf Writers' Conference as a writer. I wouldn't know about that, but I can say that even the kitchen staff was an exclusive group when I was there. We had a large number of private college students working there. Even the employees who attended public institutions had something unique about them. The girl from Michigan had grown up in Europe, where her father was a school administrator and an opera fan. He had splurged on an airline ticket so he could attend Jackie Kennedy’s second husband’s ex-girlfriend’s farewell performance. The dental hygiene student was from the town in New Hampshire where J.D. Salinger had been carrying on with Joyce Maynard. Debi said absolutely everyone had known about it.

I found that story very interesting since I was extremely jealous of Maynard because she'd had a cover article published in The New York Times Magazine the year before. I had never even written an article that some could publish. This seemed totally beside the point to me.

The kitchen staff really was the best place to be at Bread Loaf. We could get in to nearly everything that was going on, we didn't feel any pressure about doing readings, and instead of paying to be there, we were paid.

And most of us had private rooms whereas the students at the English school and the writers had to double up. 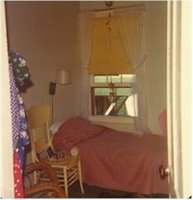 Our rooms were over the kitchen and very garret-like, which I loved. Everyone should get to spend some time in a garret when they are young. I felt very literary even though I seldom wrote anything.

Now that I have written something, I feel I deserve ac at the very least.

I've heard that these rooms have been renovated and turned over to the writers. How sad. Kids like I was back in then won't get to use them anymore.
Posted by Gail Gauthier at 7:35 PM
Email ThisBlogThis!Share to TwitterShare to FacebookShare to Pinterest