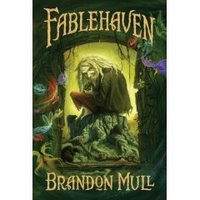 I may have mentioned here before that as a result of the influence of my first (and long-time) book editor, I believe very strongly that children's books should be about children--their issues, concerns, etc. Sounds obvious, doesn't it? But it's much easier said than done.

I recently (this morning, in fact) finished reading Fablehaven by Brandon Mull. Fablehaven is the story of a brother and sister who are sent to stay with their somewhat distant grandparents at the home their grandparents inherited after their father was grown. Once there, Seth and Kendra learn that the place is a haven for all kinds of fairy tale creatures, and their grandparents (one of whom is mysteriously missing) are the caretakers.

Now I actually think this is a promising premise for a book. The discovery in each chapter of more and more creatures is exciting. The discovery that your grandparents aren't who you thought they were and the question of what this means for you ties in with what I consider a children's theme--Who am I? How do I fit into my family? What is my place in the world?

So Fablehaven has a number of things to recommend it. But I think it also illustrates how easy it is for adult issues to sneak into children's books.

For instance, aging and mortality is a concern for one particular older character, who describes her situation and her concerns. I don't want to suggest that children don't understand the problems of the elderly. But all this material is presented from the adult's point of view, not the child's. The adult is talking, the child isn't observing an elderly adult herself and drawing her own conclusions.

I was reminded of a book I was reading with a young relative a number of years ago. An adult character starts talking about her concerns about entering menopause. My young relative looked at me with an expression that said, "Wha???" We closed the book and never opened it again. Not that there's anything wrong with menopause, of course. But it was an adult's problem presented from an adult's point of view.

Another example from Fablehaven involves an adult character who uses a very sophisticated, professorial vocabulary. This is logical because we were told long before she appears that she's a professor. And I think the author was trying to use this manner of speaking as a way of giving this character...character. However, the focus was on the adult and her adult way of speaking. This reader, at least, had to struggle to work out what she was talking about in a few scenes.

This particular situation could have become child-oriented if the child characters had ever noticed Grandma's over-the-top vocabulary. If they'd ever rolled their eyes, asked each other what Grandma was talking about, had a competition to translate what she'd just said, or told her, "Grandma! Speak English!" But they never noticed how she spoke, and so this aspect of the story wasn't about them at all but about Grandma.

In spite of my reservations, I think Fablehaven a serious, well-intentioned effort worth considering. Younger readers with good reading vocabularies might be drawn into its story. But I think it's a very good example of how hard it is to write a children's book that's really about children.
Posted by Gail Gauthier at 6:44 PM
Email ThisBlogThis!Share to TwitterShare to FacebookShare to Pinterest

I've wondered about that, too, and thought that kids might not even be able to grasp some important but wholly adult concerns.

The first draft of my first children's book came back with the comment that I had written about the mother. I had trouble with my fifth book, too, because a couple of the adult characters kept overwhelming the teenage protagonist. I think our basic instinct as writers is to write from our own lives/experiences/interests, and we are adults. Even if we're recalling events from our childhoods, we're recalling them as adults. It really takes an effort to focus on these young characters and their world.

On the flip side are the children's books that try way too hard to be about children's issues. I find nothing more intrusive than when a child character in a book starts yammering on about children's rights and how adults never pay any attention to kids. Seems like authors have to walk the fine line between out-and-out pandering to their child audiences and allowing adult issues to cloud the narrative.

If the child character truly sounded like a child, you wouldn't be bothered by her.