A Trip To The Bookstore 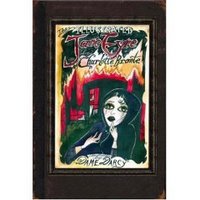 I was in a bookstore earlier in the week where I saw The Illustrated Jane Eyre with illustrations by Dame Darcy. Somehow or another I'd gotten the impression that this version was a graphic novel, which is definitely not the case. (Embarrassed.) No, this is a traditional text version with attractive, edgy illustrations. The Illustrated Jane Eyre, Gail. This edition should definitely catch the eye of younger readers.

I also noticed many Cybils titles on display. I was in a bookstore before Christmas and saw a lot of Cybils books then, too. Never in my life have I felt so au courant with my reading.

On the other hand, books that are carried (with multiple copies) in chain bookstores are usually receiving a lot of support from somebody. Especially kids' hardcover books. The bookstore has made a commitment to the book for some reason or the publisher is paying for display space or the book has hit the jackpot with reviews or attention of some kind. I had hoped that with the Cybils we'd get lots of nominations of books that readers loved but the traditional marketing world was missing. In some cases I'm sure we did. But we also received a lot of very recently published titles that were already being buzzed.

This is not to say they weren't good books. I read a great many good and better than good books during the Cybils reading period. I had just had this personal fantasy about being able to recognize outsider, lesser known books with the Cybils. (Which, by the way, I think we did with a couple of the titles on the science fiction and fantasy short list.)

I don't do lists of best books of the year, myself. But I have been thinking the last couple of days of perhaps trying to keep a list of good books that were lost in the crowd for 2007 and posting it next December. That's awfully long-range planning for me. And that's also assuming that I do plenty of reading of 2007 titles. I'm usually not that up-to-the-minute with my reading.

But maybe.
Posted by Gail Gauthier at 7:54 AM
Email ThisBlogThis!Share to TwitterShare to FacebookShare to Pinterest