A Book For Your Younger Boys 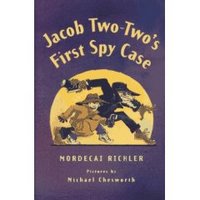 A few weeks ago a conversation was going at one of my listservs on books for rowdy boys. (I'm up to six listservs now. I haven't even looked at three of them in over a week.) Someone suggested the Jacob Two-Two books by Mordecai Richler.

Well, wouldn't you know it, Richler is another meaningful figure for Gail. I took two semesters of Canadian lit when I was in college, trying to get in touch with my ancestors. It didn't work because the course didn't cover any French Canadian literature for the obvious reason that it was taught in English. (Or maybe there was something political going on. I mean there should have been some English translations of French Canadian work, right?) So I left the academic world with no greater understanding of my forebears but with the feeling that people like Margaret Atwood, Robertson Davies, and Mordecai Richler were friends of my youth.

So after being reminded that Richler had written for children, I went right out and found (at A Reading Fool's library) a copy of Jacob Two-Two's First Spy Case. Though the book was published in the 1990s (not so very long ago) it has a retro feel that is charming rather than dated. It's probably due to the fact that Richler began the three-book Jacob series twenty years earlier, in the mid-70s. (Evidently adult authors have been dipping into the kidlit pool for a while.)

Though it might be retro even for that period. Jacob is the youngest of five children, at least a couple of whom have some unusual interests. Dad is loving but a little on the curmudgeony side. The book seems a little bit of a throwback to stories about slightly eccentric English families.

That's not a complaint, by the way. I like those books.

There's lots of wordplay, which I'm not terribly fond of, myself, though I understand kids like it. The book also has a lot of material built around very traditional kid interests--spies, card tricks (a very good one), superheroes, and over-the-top adult nasties at school. Who are, of course, defeated by Jacob.

And these books are truly set somewhere--Montreal. A lot of short chapter books don't have a strong sense of being about any particular place.

Jacob Two-Two is a very real character. His books would be great for the kind of traditional boys boy who thinks books aren't for kids like him.

And in Canada you can watch Jacob Two-Two on TV. It looks as if he's been on Cartoon Network, too. And there's a Canadian band named Jacob Two-Two. They definitely have a Richler connection. If you click on the line "Mordecai Richler's Letter," you'll see copies of the letter a band member wrote him and his response. His response--priceless.

Forget about the freaking Newbery Medal! I want a band named after one of my characters!!!
Posted by Gail Gauthier at 6:34 PM
Email ThisBlogThis!Share to TwitterShare to FacebookShare to Pinterest
Labels: Jacob Two-Two, Modecai Richler

Is your French Canadian heritage part of the inspiration for Therese and her family in the Hero of Ticonderoga?

Absolutely. That farmhouse was where I lived from the time I was 3 until the end of second grade. When my Aunt Tessie read the book, she recognized the wallpaper on Tess's bedroom wall.

My father was very much like Roland, a first-generation American who spoke only French until he started school. I, however, do not speak it and can't claim any great knowledge of French Canadian culture.