Fairy Tales For The Guys 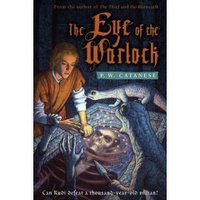 I wanted to check out some of the Further Tales Adventures by P. W. Catanese because the author lives in my state. I only read one, The Eye of the Warlock, but I think the series might be of interest to young readers who like plot-driven stories.

With "Further Tales Adventures" Catanese takes a well-known fairy tale and uses it as a starting place for another story. In the case of The Eye of the Warlock, he uses Hansel and Gretel. A middle-aged Hansel comes back to the scene of the gingerbread house where he almost met his end to look for treasure he had hidden there. Along the way, he picks up three youngsters, one of whom is related to him. The plot involves some outer-limitish type characters who are connected to the witch Hansel helped do in so long before. That wasn't particularly compelling for me, but I think it could very well be a draw for younger readers, who are, after all, the book's audience.

The quality of the writing is decent in terms both of basic putting words together into sentences and plotting. Something is always happening in this book, which will make many readers happy. But Catanese also tries to get some depth into his story--Hansel is not a brave man, by a long shot, but one who tries to do the right thing. And don't get any ideas about living happily everafter. You can only live as happily ever after as can be expected.

One of the things I like about the Further Tales Adventures book is that they are published as trade paperbacks. That means there's a better chance that kids can afford to go out and buy them themselves. They're more accessible.
Posted by Gail Gauthier at 3:34 PM
Email ThisBlogThis!Share to TwitterShare to FacebookShare to Pinterest
Labels: boys and fairy tales, P.W. Catanese