A Fantasy For Readers Who Don't Care For Fantasies 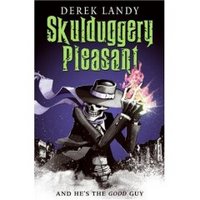 Once Skullduggery Pleasant by Derek Landy was brought to my attention by the Cybils folks, I started hearing good things about it from others, too. For good reason.

Skulduggery Pleasant is one of those books in which a young person teams up with an over-the-top in the best possible way adult character. In some of those books, the adult character overwhelms the child. One of the beauties of Skulduggery Pleasant is that the child character is easily able to hold her own with the adult. Or we should say, the sort-of adult. Maybe, former adult.

Young Stephanie Edgley runs into the very odd Skulduggery Pleasant after her uncle and his friend dies suddenly. After Skulduggery saves her from an attack by a mystery man, she learns that he is a walking, talking skeleton. He more than walks and talks. He's magical. Well, okay. I guess that goes without saying since we're talking a skeleton that gets around so well. It's the talking that's the best part about Skullduggery, anyway. He's very witty, very laid back, very smart. He's very all the good things you want to see in a heroic figure. Or all the good things I want to see in one.

Stephanie, of course, ends up drawn into Skulduggery's detective work. Fortunately, both for her and for her readers, she has a gift for it.

1. There are masses of fantasy writers out there and they all have to come up with a fantasy world for their fantasies. Personally, I find that kind of trying. It took me a while to work out just what kind of world Skulduggery was part of. But I must say, this particular story had a very good and logical climax.

2. This is a book with characters both girls and boys can identify with. Though the child main character is a girl, Skulduggery, back in his living days, was a man. The fact that he was an adult back then doesn't matter much because now he's a skeleton, a hip, clever male skeleton, which transcends age groups, in my humble opinion. So there's definitely somebody here for everybody.
Posted by Gail Gauthier at 7:29 PM
Email ThisBlogThis!Share to TwitterShare to FacebookShare to Pinterest
Labels: fantasy, Reader response

I'm glad you enjoyed this one, Gail. I also loved it for what it was: pure entertainment. Fun, fun, fun.

So glad you enjoyed it, Gail. I loved it, too. I agree that this is a book that should appeal to both boys and girls. It's one of my son's favorite books of the year, and Skulduggery's repartee is definitely his favorite part. It's probably significant that his other favorite book of the year is The True Meaning of Smekday, and it also has a lot of humor.