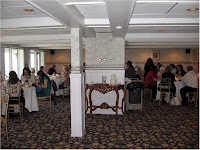 Yesterday I spent three hours at a bridal shower. I've written before about how lame I am at conferences. Showers, the same thing. There is some question about whether or not I have a hormone defiency that makes it impossible for me to get all excited when some poor engaged woman has to cut a ribbon on a package and everyone cheers because that's supposed to mean another child for the happy bride. What the hell century are we living in, anyway?

Here's what's weird, though. If you look at the picture at the right taken at the shower, you will see that it looks amazingly like lunch at a writers' conference. Seriously. I'm not making this up. Other writers--am I right?

One of the other guests was a reading teacher from the local middle school, whom I just happen to know. We chatted for a bit, and she told me that she's still using The Hero of Ticonderoga with some of her slower readers, even though it's a middle grade novel and thus somewhat young for her seventh graders. She says that what ups the difficulty level for this book and her readers is the father's dialect. He speaks with a French accent, him.

The fact that Nancy, she grew up in Vermont, her, with two Franco-American parents who spoke like that is a draw, too.
Posted by Gail Gauthier at 11:51 AM
Email ThisBlogThis!Share to TwitterShare to FacebookShare to Pinterest
Labels: The Hero of Ticonderoga