Launch Party For "One For The Murphys" 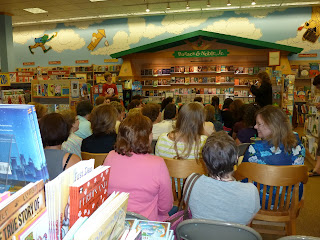 It turns out that book launch parties are fun events, at least for guests  who don't have to plan or run the show. Lynda Mullaly Hunt threw a party last night for the publication of her first book One for the Murphys. Get a load of the crowd who turned up.

Since Lynda and I live in the same town, we know some of the same people. And, it turns out, we have some of the same Facebook friends. I had a grand old time going from person to person, being perfectly appalling by commenting on my real world acquaintances' tans and how great they looked because, living almost totally in my cellar, as I do, I hadn't seen many of them in a long time. (It's supposed to be rude to comment on someone's appearance. In my experience, no one objects to being told they look good. If any of you meet me in the flesh, by all means, feel free to tell me I look fantastic. Perhaps far better than you expected, even.) Some of you may remember that last year I came up with this idea for meeting and greeting at professional events that involved going up to people and saying, "Gee, you look familiar. Do I know you?" Well, I was doing it all over the place last night, because there were people there who did look familiar to me. And I did know them. One way or another, at least. With Facebook people I was going, "Hey, do we know each other on Facebook?" And there were three people there I did know from Facebook. 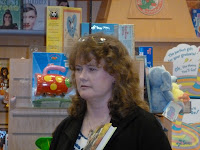 Ah, but the launch party wasn't all about me having a good time. This picture of author/host Lynda Mullaly Hunt shows her in a pensive moment. A still picture (especially one I've taken) can't portray how  comfortable she appears to be speaking in front of a group or convey that she's an excellent story teller. Part of being a good story teller is being able to recognize a good story, and she had at least three excellent ones last night that she told very well.

So One for the Murphys is now out in the world. Lynda is working on her next book.