More From Ivy And Bean, Two Of My Favorite Girls

"Bean could be described as a Junie B. and Clementine type of child in that she tends to go her own way. Her creator describes her as "loud and wild." The difference between Bean and the other leads in the big, girl series is that Bean is comfortable with who she is. She isn't always anxiously interacting with adult characters who reassure her in some way or are involved in helping her learn a reassuring lesson. Most of Bean's interaction is with another child and not adults. She interacts with Ivy, her co-lead, who, superficially, is your stereotypical quiet little girl.

Yeah, your quiet little girl who is into magic and potions, and who is sharp as a tack. Talk about still waters running deep." 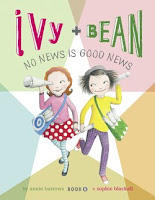 Their eighth book, No News Is Good News, is more of the same, and the same is very good. Ivy and Bean want to take part in a school fad that requires money. Their first plan to make some involves selling potions that Ivy would make. Surprisingly, that doesn't work. So they fall back on creating a neighborhood newspaper, as Bean's father did when he was young. They grasp the concept of selling subscriptions right away. That they will have to provide something to the people who paid up comes as something of a surprise to them. They also struggle with the concept of "news."

Yes, stories about child-run newspapers have been done before. But not with Ivy and Bean.

Ivy + Bean No News Is Good News is a Cybils nominee in the Easy Readers/Short Chapter Books category.