If This Had Happened This Week, We Wouldn't Have Been Dancing In The Road 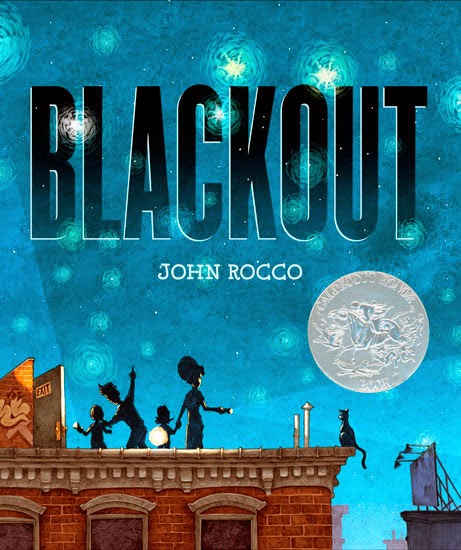 John Rocco has a picture book out called Blizzard that's been getting a lot of attention the last couple of months. It would have been terrific if I read that this past week and could write about it now after the events of the last couple of days here in New England. Yeah, well, that didn't happen.

I did pick up Rocco's earlier book, Blackout, from the library a while back. It would have been terrific if we'd had a power outage this week, a threat that was hanging over our heads this past weekend, and could write about it after reading Blackout. Yeah, well, that didn't happen, either.

But I'm still going to tell you about Blackout because it is beautiful. I am not the only person who thinks so, because it was a Caldecott Honor Book in 2012. It is beautiful looking with a lovely, simple story of people having a great time when the lights go out. That simple story is told without a lot of text, something that doesn't happen as often as you'd think with picture books.

By the way, Rocco also illustrated How to Train a Train by Jason Carter Eaton, which happens to be a big hit with a member of my family.