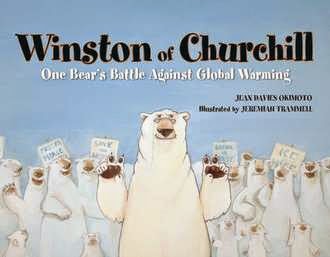 The picture book Winston of Churchill: One Bear's Battle Against Global Warming by Jean Davies Okimoto with illustrations by Jeremiah Trammell teeters between being preachy and instructive and clever and witty.

Winston is a polar bear near a town named Churchill in Manitoba, Canada. He wears glasses and is always holding a lit cigar, much like another Winston named Churchill. Bear Winston is in a position of polar bear leadership, much like British Prime Minster Winston was in a position of human leadership. The polar bears are facing the melting of ice in Hudson Bay due to human pollution, much like the Brits were facing invasion by the Na...No, that's kind of a stretch. But when Bear Winston rallies his bears, he does sound a lot like British PM Winston rallying his people.  '"We will for fight ice," boomed Winston. "We shall defend our island, whatever the cost may be. We shall fight on the beaches. We shall fight on the landing grounds. We shall fight in the fields and in the streets. We shall fight in the hills. We shall never surrender."'

That's what makes this book clever and witty, the whole polar bear-doing-Churchill thing. Because a polar bear isn't Winston Churchill, and the incongruity is funny.

But then you get to the lesson stuff. '"Ice is melting because it's getting too warm around here and people are doing it with their cars and smoke stacks. And cutting down trees."' I'm not saying that's not true, but instruction is awkward, to say the very least, in fiction. Winston of Churchill even includes a page from a book Winston of Churchill wrote on global warming to make sure to get the educational stuff across. Though I'm going to take a wild guess that I'm not the only person who skipped it.

But here's the clever and witty thing about that book written by Winston of Churchill--Winston Churchill wrote books, too!

The illustrations in this book are marvelous and very engaging, and I think kids will be attracted to the bears and some of the humor. Some will be left recalling that human actions are wrecking ice for those neat bears. It will probably be adults with some knowledge of a World War II historical figure who will enjoy this book the most.

Winston of Churchill won the Green Earth Book Award for Children's Fiction in 2008.