Now You, Too, Can Give A Reading-Themed Birthday Luncheon For Adults

I am sure you all recall that yesterday I said I couldn't get sick this weekend because I was running a family thing. Well, I gave a birthday luncheon today. Not a party. I don't do parties. This was a luncheon for thirteen women.

You know how this past week your Facebook page was covered with your friends' pictures of their siblings for something called...ah...Sibling Day? Seriously. Where did that come from? Has anyone heard of it? All of a sudden it's here and people were carrying on as if it's Christmas. Well, my sibling didn't get her picture as a little nipper put up on Facebook. She got a birthday luncheon.

My sister has been a member of a book group for around fifteen years. (I think that's about when my own book group fell apart.) I learned today that she's the one who prepares questions for every single meeting. She's also very taken with her Kindle Paperwhite. Thus, while planning this luncheon I used a reading theme. 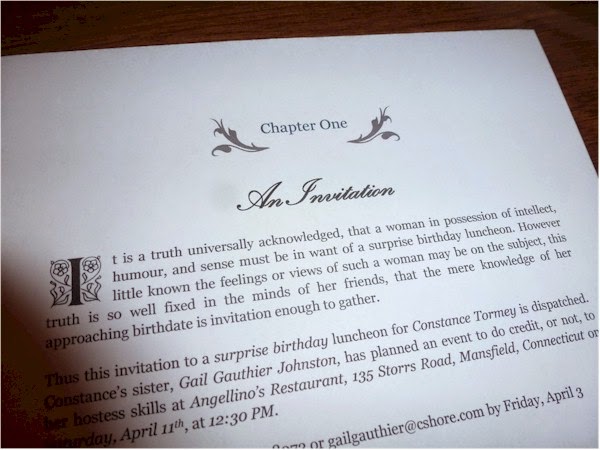 I began, of course, with an invitation. No, actually, I began with finding a place to hold this thing. Then I went on to the invitation. Mine looked like the first page of the first chapter of a book. I used the first sentence of Pride and Prejudice as my inspiration.

IT is a truth universally acknowledged, that a woman in possession of intellect, humour, and sense must be in want of a surprise birthday luncheon. However little known the feelings or views of such a woman may be on the subject, this truth is so well fixed in the minds of her friends, that the mere knowledge of her approaching birthdate is invitation enough to gather.

Of course, others may take their inspiration elsewhere. You just have to remember to work in the details about where this function will be and when. 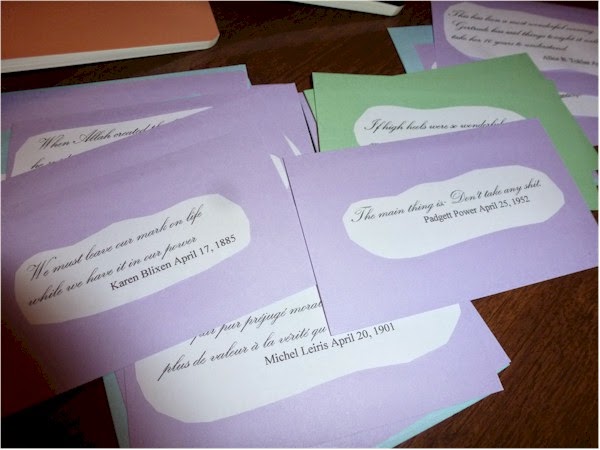 Ordinarily, I wouldn't give a rat's patootie about table decorations, but my sister gave me a birthday luncheon a while back and she had table decorations, so what are you going to do? What I did was collect a quotation from authors who had birthdays in April. Because this is April, get it? My sister's birthday is in April? One for each day of the month. I used authors and quotes from Library Booklists. I used the same font I used for the "An Invitation" invitation title. I cut the quotations and author names and birth dates out and glued them to some colored index cards that I found in the office, to be honest. Then I spread them around the table at the restaurant. (Actually, I got someone else to do it.)

I thought the quote decoration wasn't going to go over all that well. It was the kind of thing I could easily have forgotten to put out, remembering the cards half way through the meal. Or they could have dropped like a brick, even though there were members of my sister's book group there. However, my sister liked the idea, made sure everyone had a card, and had them take turns reading them aloud. (She does do parties.) So this went well. 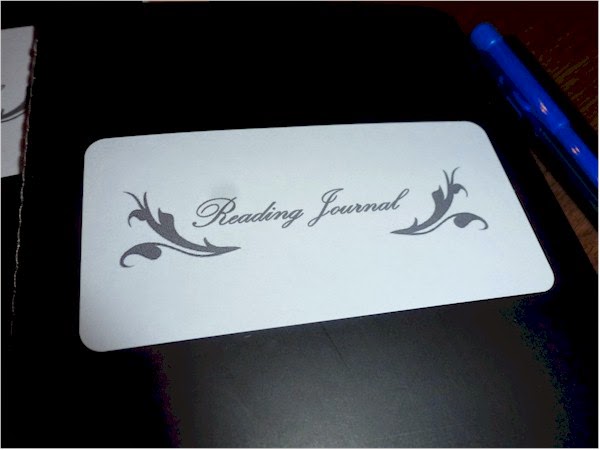 Then for favors for the guests I had reading journals and Pental pens. Let me tell you, people loooove Pental pens. I got 18 of them for $4 on sale at Staples. I mention that because I'm one of those people who has to tell everyone when she gets a deal. Notice that the labels for the journals match the invitations, match the font on the author quotes. Yes, Computer Guy did some of that. 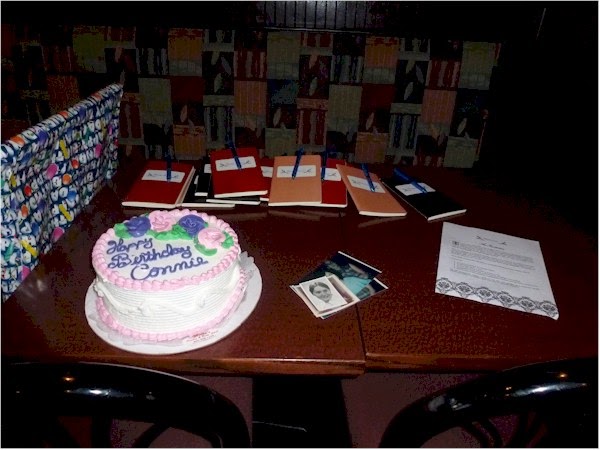 Now maybe a reading theme won't go over as well for a kid gathering because, you know, no wine. But this worked for my adult group today.
Posted by Gail Gauthier at 8:53 PM
Email ThisBlogThis!Share to TwitterShare to FacebookShare to Pinterest
Labels: Gail goes on and on

What a great idea! I love the quote idea. Now I have to go to Staples and look for Pental pens so that I can see why people like them.

I've been having a problem recently with the cheap BIC stick pens that I've used for years. So far, the Pentels seem more reliable and smooth.

It was a wonderful gathering of women. Connie is very lucky to have such a great sibling. Thanks for letting us join the celebration.

Randi! How great to see you here.

Your grateful sibling thanks you for a wonderful party.

Oh, my gosh, Connie. You can make comments! We're entering a whole new era. I'll be sending you links all the time. I've got one in mind already.

Gail, Thank you for being such a gracious hostess and inviting me to join in this wonderful celebration. Great group of women.