In Saving the Planet & Stuff, one of Michael's tasks while working for The Earth's Wife is to research "second lives," so to speak, for the waste that had been diverted to Walt and Nora's spare bedroom. He uses 1001 Ways to Give New Life to Old Things (Northampton, Mass.: The Free and Open Press, 1973) for this job.

On Monday morning, Roberta asked him, "What kinds of things have you been finding in your room? You said you made a list."
"Butter containers," Michael said. "There are hundreds of butter containers under the bed. They're all different sizes and colors and brands. And then there are lots of those artificial-whipped-cream containers."
"Someone must have given Nora those. She would never buy anything in a plastic container herself. And she wouldn't buy artificial whipped cream no matter what it came in."
"Plus, there are empty bleach bottles all along one wall," Michael said.
Roberta groaned. "I swear, when I was in college, people were making purses out of bleach bottles. Or maybe that was just one of those urban legends, because you never actually saw anyone carrying one of the things. I did know a guy who made himself a vest out of the ring tabs on soda cans, though."
"There are only a half dozen soda cans. I brought them in yesterday," Michael admitted.
"Fortunately that's not enough to make anything out of. Whatever you do, don't buy any more. What else have you got?"
Michael looked at his paper. "There are some used beach towels."
"Are they nice?"
"No."
"Maybe we can make pot holders out of them. What's that you've got written there? 'Blue jeans'? Are there a lot of them?"
Michael nodded. "But they have holes."
"Now those we can use to make a quilt. I've seen a few of those. They're actually attractive."
"A quilt!" Michael repeated. And then he thought, What does she mean by "we"?

I think my Aunt Tessy really did make one of those bleach bottle purses. I don't know if she went out in public with it.

When the original edition of this book was in the editing stages at G. P. Putnam's Sons, someone there told my editor that no one would cut up old blue jeans for a quilt. They were too valuable. Well, I would. I don't have any kind of emotional attachment to my old Levi's. Or those of any of my family members. 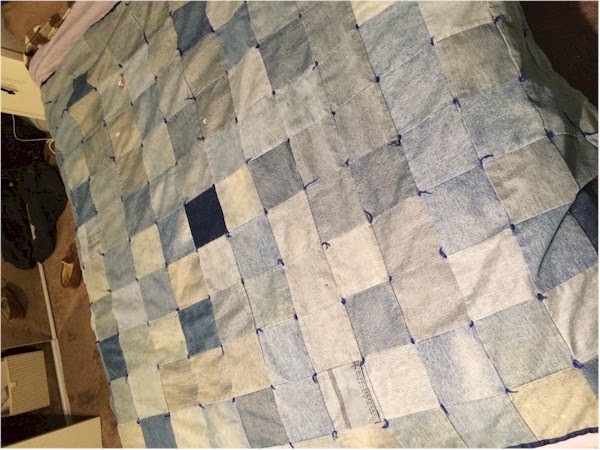 And so, folks, I have, indeed, made a denim quilt out of old blue jeans. I think it was done either just before I was writing this book or soon after. It went away to college with someone and is now in his house. I also made a cute little bag for a girl out of denim with a denim patch work side. Don't have a picture of that. 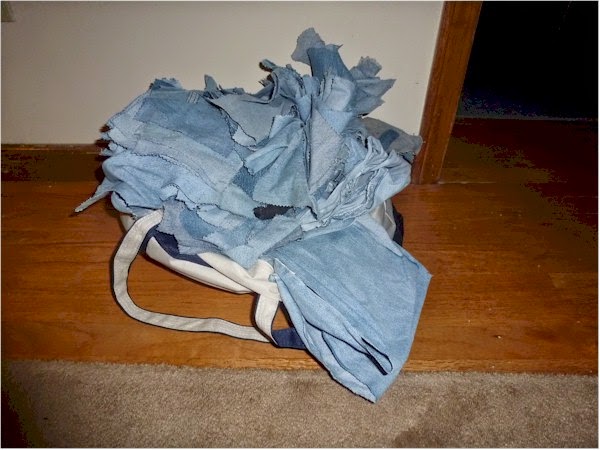 What I do have a picture of is all the denim, some of it already cut into squares, that I've collected for another quilt. A couple of weeks ago a family member was visiting and told me he had a bag of denim for me but had forgotten to bring it. So there will be more squares and more quilts and maybe more denim bags.

Wow. Little denim bags. I could have cranked out a bunch of those and used them for swag. I could make a little denim bag and put a copy of the original paper STP&S in it for raffle donations! Got to think seriously about my ROI on that idea.

This whole recycling old things business was a bigger deal in my college days, so this is another example of an autobiographical element making its way into my work. Recrafting recycled items still has its advocates, however. Team EcoEtsy is a group of sellers on Etsy who reduce, reuse, and recycle. This past month they ran a trash-to-treasure challenge to celebrate Earth Day.

Nora would have done an article about them for The Earth's Wife.

Posted by Gail Gauthier at 8:15 AM
Email ThisBlogThis!Share to TwitterShare to FacebookShare to Pinterest
Labels: crafts, quilts, the annotated STP&S