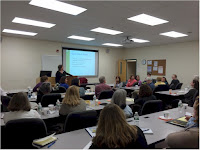 Last Saturday I attended the New England Society of Children's Book Writers and Illustrators' program Designing and Booking School Visits. I'll be discussing that sometime soon. Because I have my priorities straight, I'm going to write about people I met there first.

I arrived late and was seated at the back of the room. During a break or lunch (I don't remember which. Perhaps I was overexcited.), I overheard some people at the table in front of me talking about where they were from. One of them said she was from the town next to the town where I spent most of my childhood. So I shoved my way onto their table, interrupted their conversation, and said, "I grew up in Sudbury!"

Well, it turns out that Marilyn Taylor McDowell has only lived at her present Vermont location for three years. This is important, because I was afraid she was someone I'd gone to high school with and had forgotten. In fact, at one point Marilyn lived in southern Connecticut, she knows Connecticut writers, and she is a former Tassy Walden winner. Yes, that Tassy Walden.

Additionally, she is the author of Carolina Harmony.

So we talked about changes in the town she now lives in, where I went to high school and worked at the Five and Ten. (You used to see books about girls working in Five and Ten cent stores. Not so much anymore, primarily since there aren't any.) 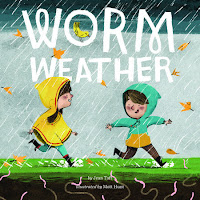 I left those poor people alone and went back to my seat. What happens next? The woman sitting next to me says, "I'm from Milton." That's Milton, Vermont, where I did a school appearance maybe six to eight years ago. This was Jean Taft, whose first book, Worm Weather, will be published in October. She also doesn't live in Vermont anymore, which is why I'm telling you where she used to live, whereas I didn't tell you where Marilyn does live. Because I'm making an effort to be discreet.

Jean and I got along like a house on fire.

For maybe ten or fifteen minutes out of the whole day, I was part of my own little faction in the back of the room. Except that we didn't have a dissenting political agenda or anything. You could say we were unified by a shared knowledge of place(s).

*The "Allen faction" is the term used by Michael A. Bellesiles in Revolutionary Outlaws: Ethan Allen and the Struggle for Independence on the Early American Frontier to describe "Ethan Allen and his adherents" in pre-Vermont New Hampshire Grants.
Posted by Gail Gauthier at 8:42 AM
Email ThisBlogThis!Share to TwitterShare to FacebookShare to Pinterest
Labels: Gail goes on and on, Travels With Gail