I had an interesting experience reading What Happens to Our Trash? by D. J. Ward with illustrations by Paul Meisel. I read parts of it aloud at dinner, which I was eating with a civil engineer. He approved the descriptions of the clay and plastic layers in the landfill. When I read, "The trash gets covered with dirt each day," he called out, "Daily cover!" When I read, "When a landfill becomes full, workers carefully cover it," he exclaimed, "Final cover!" (Those terms may date him. It's been a while since he's done design work for a landfill.) The book discusses landfills at some length. 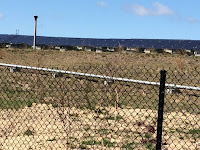 In our part of New England, they're uncommon. We had them, and they ran out of space, just as Ward describes. And, yes, they're often turned into parks after they're closed, again as Ward says. Though we think the solar farm we saw along a bike trail last month may have started out as a landfill. It was peppered with pipes like the one to your left, that may have been there to deal with the methane Ward tells his readers about.

Believe it or not, two adults discussed this picture book over dinner. For instance, in other parts of the country, we theorized, where there is more open land, there are probably far more landfills, whereas we've had to move on to incinerators. And guess what? Ward writes about incinerators, too.

I think What Happens to Our Trash? would work well as a read-aloud with kids, so they can discuss how the book relates to their lives the way we did. Though maybe their read-aloud shouldn't be done at meal time.