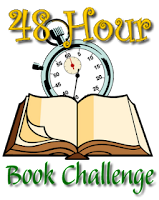 Last night I said that I was delighted to see that my first book for the 48 Hour Book Challenge was written in the present tense. Well, wouldn't you know, so was my second.

Scars by Cheryl Rainfield is the story of how fifteen-year-old Kendra deals with the trauma of having been a long-term victim of sexual abuse. In short, she deals with it by cutting. She also had a romance go bad and is about to embark on another. I don't want to say too much about that, because I felt that the romance is slowly revealed, and I don't want to do any spoiling.

Scars is sort of a combo thriller and problem book because when our story opens, Kendra is being stalked. She believes the stalker is her abuser, whose identity she has repressed. She's repressed it for good reason. He threatened her if she revealed it. But Kendra is quite a talented artist, and some of her old experience is coming out in her work. Especially in the beginning there is a sense of paranoia and threat because, since Kendra can't recall who raped her repeatedly as a very young child, she has to fear that it is any of the men she knows.

As I was reading this, I kept thinking of Hitchcock, and imagining what I was reading as a movie. I was kind of embarrassed about that, because the book is dealing with some very serious issues. But now I'm thinking of Kendra as a twenty-first century YA teen trapped in a Hitchcock movie, which is at least a little arty. Who would Hitchcock cast as the kind, caring, gay adult friend? Are there any gay characters in Hitchcock movies to provide a model? How about Colin Hanks and someone like him for Dad and Mr. Blair, the math teacher? And lets cast three cool Hitchcock blondes as Mom, Mrs. Archer the art teacher, and Carolyn the therapist. I'm thinking Nicole Kidman, Charlize Theron, and somebody else. (I'm on  a tight schedule here, folks, and can't spend much time casting this. I've only got 48 hours, remember.)

Disclosure: Cheryl Rainfield and I were blogging buddies years ago and are Facebook friends now. I read the eBook edition of this book, which I got sometime back during an Amazon promotion.