Cybils Award: Our Middle Grade Winner Is "The Blackthorn Key"

The Blackthorn Key by Kevin Sands took the prize this year for middle grade fiction. It's both historical fiction and a mystery, two genres I was very fond of in my youth, so I'm happy to see it made it to the top of our short list. The Blackthorn Key avoids the oppressive days-of-old voice or feeling that sometimes drags down historical books, especially those for younger readers. Oddly, it reads a bit like fantasy. But it most definitely deals with England in the mid-sixteen hundreds.

Christopher Rowe is an apothecary's apprentice, assisting with the creating of medicines that his master dispenses. At the same time, he's a kid horsing around with his buddy the baker's son. It makes him a regular guy by our standards and a nice bridge between readers and the historical material.

Christopher gets dragged into a mystery when apothecaries are being murdered. Oh, wow. That's sort of a seventeenth century serial killer, isn't it?  Christopher's master has some knowledge of what's happening, or, rather, why it's happening and entrusts him with coded messages that will help him gain that knowledge, too.

One of the things I particularly liked about this book is that there is a search going on for something that appears to be mystical or spiritual. But in reality, what I think they're talking about, though they don't know it, is science. So we've got both history and science here.

I often hear that historical fiction isn't popular now or a hard sell with publishers and readers. Cybil laughs in the face of that kind of talk. 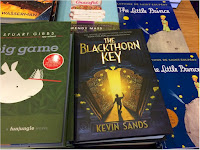 The day after we selected The Blackthorn Key as the Cybils Middle Grade Fiction winner, I saw it on display at a Barnes & Noble. Good luck to this book and its author.

It sounds like a very interesting book. I too loved to read history when I was young.
Looking forward to your posting about the other winners.

Can't wait to read this! Putting it on reserve at the library today!

Well, then, Carol, my job is done.

Looks very interesting! Thanks for sharing.