Cooking Isn't That Different From Writing

No cooking today. I didn't even make meals, living off leftovers from take-out and Friday night's trip to a restaurant. After serious cooking the last two weekends and then taking part of Friday off to prep for a family event yesterday, I was finally able to get my couple of hours of sitting on the couch and reading. I didn't get nearly enough done, but that's life, right?


I started writing about my cooking here because I consider it unnecessary creativity. "...creative acts--making something, anything, that didn't exist  before--that are unrelated to an individual's work. "...something about engaging in the creative act on our own terms seems to unleash latent passions and insights." In other words, creativity spurs creativity."

Sure enough, last weekend I had a creative thought over a pot of spinach soup.


Okay, so I was interested in trying spinach soup. Why? I like soup, like to eat it several times a week, particularly pureed soups. I was getting tired of carrot and squash and heard about spinach soup somewhere. You know, like when you've been writing in the same style for a long time and you want to mess with structure?

So I found this recipe that called for zucchini as well as spinach. Well, I like zucchini. The recipe didn't call for very much stock, but I've been making soup regularly for a few years now, so I thought I could add more. And where was the thickener? I'm an experienced soup maker. I threw in a quarter of a cup of rice.

Pre-puree the soup wasn't anything I wanted to show to anybody. Post-puree, it was...serviceable. It was a serviceable soup, like a serviceable piece of writing. I could think about the soup for a while. In fact, I froze it in batches so I can keep trying it and thinking about it for quite a while, the way you should think about a rough draft for quite a while. I have rough drafts I've been thinking about for years.

Also, I've lost the recipe I used. And even if I had it, I made a lot of changes that I don't fully recall. Talk about a work-in-progress.

Finding Treasures In Your Filing Cabinet


I make a big effort to keep my drafts organized and labeled so I can quickly put my hand on them. Should I want to. But, it never fails. Something always slips through the cracks. Like the container of cookie dough I found in one of the freezers last weekend. (I'm sure you're not surprised to hear that I have two. The one in the garage is like a tank. You can't do anything to stop it.) I thought it was cookie dough, but what kind? It was in the freezer because at the time I started it, I couldn't finish. Now I could do something with it. But what was it?

It was mint chocolate chip! And, yes, I was able to finish the job.


After a little research, I came up with something fantastic this weekend. Turns out, you can freeze raw scones and then bake them the day you need them so they'll be fresh! This is major. And even more major? I found a recipe for yeast rolls that could be made and shaped the day before and then baked when you need them. I had recipes to do this with sweet rolls, but I wanted savory ones. If you have to bake yeast bread the day before you need it, you are serving day-old bread, my friends. 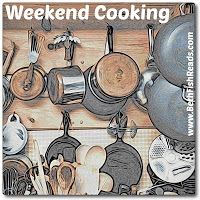 Your comparison of the basics is interesting, though I think when you go a little further, there are also key differences between cooking and writing! As they say, don't eat the recipe.

Cook write - not a bad life! Have a great week. Cheers from Carole's Chatter

Cooking and writing *do* go together! That soup looks yummy.

I'm trying to think of differences, Mae. That could be another blog post.