When last we discussed the issue of my need to listen to something while cooking, things were not going well. The sci-fi and horror podcasts I'd found were not grabbing me. I definitely couldn't take any more writing process podcasts or writer interviews. 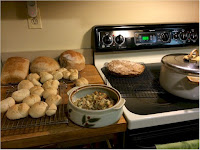 Well, today I needed to do some restocking in the kitchen after having been away from home for nearly three weeks. It got a little bingie, because I made two types of bread without a bread machine, since I lent mine to a family member before I went on vacation. And, by the way, I've still got what it takes to do 8 minutes of kneading...twice. Booyah!

On top of that, I hit the old motherlode with podcasts. These were actually from two podcast series I subscribe to. I just hadn't listened to them in a while.

The first two episodes came from Eric's Guide to Ancient Egypt. I was interested because I'm revising what I refer to as the mummy book. The material I listened to was terrific.
There are a number of other episodes I want to listen to because they relate to my book. I don't know how I missed them. I think I recently downloaded a bunch of new episodes, and the goodies were in there.

In addition to two batches of bread, you can see from the picture above that I also made a cake, some potato stuffing (meh), and began a batch of Amish chicken pot pie. That's in the white kettle, because Amish chicken pot pie has nothing to do with pie. All that took a while, so I went on to: 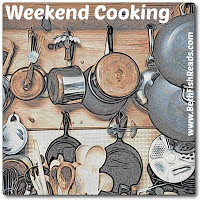 I'm feeling a lot better about podcasts right now. And I'm set for bread for a while. 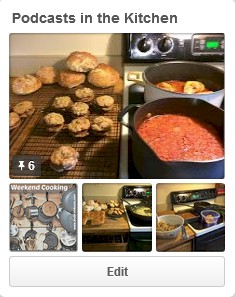 I'm taking part in Weekend Cooking at Beth Fish Reads. You can also take a look at all my Podcasts in the Kitchen posts through my Pinterest board.

Because I'm usually listening to a book, I tend to forget about podcasts. Thanks for reminding me that I have a bunch I enjoy. Next time I'm between books, I'll take a evening to listen.

Good job on kneading by hand. And I know that type of "pot pie," which I discovered only after I moved to Pennsylvania.

Your ambition to make so many different foods is impressive! Also your ability to do more than one thing at a time. I'm more into music when cooking for long times -- doesn't distract me from the main task.