A Poet Kids May Want To Know About

I can't claim to be at all knowledgeable about poet e.e. cummings, though I've certainly heard of him. I didn't have to know much about him to find Enormous Smallness: A Story of E.E. Cummings by Matthew Burgess fascinating.

The book spends a lot of time on Cummings' youth (He sounds like the rare artist/bio subject who had a happy childhood.), a great idea for a children's book. Then it makes a smooth transition to his adult life.

The book makes an interesting connection between Cummings and artists working in other artistic fields, such as Gertrude Stein, Paul Cezanne, and Igor Stravinsky. They "were challenging the way we think and see. In all of the arts, people were in pursuit of the new and Estlin wanted to make his mark, too."  Last month, The Millions carried an essay related to Impressionism's influence on Virginia Woolf's To The Lighthouse. The idea that all sorts of artists in a particular period are connected is new to me.

This is a beautiful looking book, too.

The MacDonalds And Their Farm 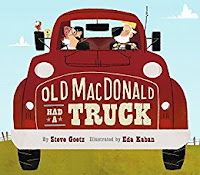 One of the many neat things about this book is all the face time Ms. MacDonald the farm wife gets.

Personally, I don't get children's fascination with heavy equipment. However, I heard someone on NPR suggest a few weeks ago that it has something to do with powerless children associating themselves with the powerful equipment. No idea how accurate that is.

I think this book is a example of what Pegi Deitz Shea was talking about at the Publishing Children's Books panel discussion earlier this month. Old MacDonald stories are concept books in that they teach children about farm animal sounds. Pegi said that if writers can "provide a twist to a concept," they have a totally new book. Old MacDonald Had a Truck is a definite twist.
Posted by Gail Gauthier at 11:58 AM
Email ThisBlogThis!Share to TwitterShare to FacebookShare to Pinterest
Labels: 2015, 2016, picture book biography, Picture books, Reader response

I grew up in a farming community and am pleased to hear that the farmer's wife gets face time. They work as hard as their husbands -- one reason I found my husband outside of the community. : )

I cared for children in day care centres for many years and know that a tale about a truck will be a hit. My friends were entertained by vehicles--large and small.

While I was reading the book the first time, I was more focused on the equipment then the characters. I saw the female character and thought Old MacDonald was a woman. But there was a male farmer character, too.