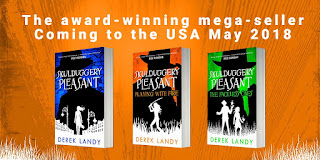 Author Derek Landy announced on Twitter a few weeks ago that the entire Skullduggery Pleasant series is finally coming to the U.S.A. The first three books, which were published here, will be re-released in May. According to one of Landy's Jan. 21 texts, the next six are supposed to be available by the end of the year.

My more faithful readers are aware that I am a fan of the Skeleton. I ordered the final six books from England through Amazon, passing them along to my niece. And it has been a mystery to me why the series was dropped in this country after the first three books. As I asked back in 2012, "What was the problem? Were they too clever and witty? Did someone object because this fantasy wasn't all doom and gloom? Well, okay, it was pretty doom and gloom what with Skulduggery being dead and all and fighting some group that often seemed unbeatable. So if depressing tragedy is a requirement for fantasy on this side of the Atlantic, the books had it. They were just amusing about it. Is that a crime?"

I also realized recently that a tenth Skulduggery book came out last year, and I missed it. I'm debating what to do about that. I felt that I'd finished the series. and I don't know if I want to continue with that feeling of done and out or if I want to go on. If I go on, I'll probably order it from merry old England somehow, because  they're only talking about publishing the first nine here.

Oops. An eleventh book is coming out this summer. You can't keep a good skeleton down.

Yes please! I love the three I've read, and I'm sorry I didn't keep up enough to know they were available in the UK.

The ninth book, which I assumed was the last, was particularly good.