Last week I described Saving the Planet & Stuff as having an environmental setting because much of the book's action takes place at the editorial office of an environmental journal. Additionally, there are scenes in the home of seriously committed environmentalists.

But the book also has a "real world" setting, a street and a town. It's set in East Branbury, Vermont, a place you will not find on any maps, because I made it up. (Though you will find Branbury State Park, which my family referred to as Branbury Beach.)

I grew up in three different towns within a half an hour of Middlebury, and some of my older relatives ran farms in the area back in the day. Nonetheless, in spite of the Gauthier connection, Middlebury was bohemian bourgeois before bohemian bourgeois came to America. (We Gauthiers are neither bohemian nor bourgeois, forget about doing both of them at once.) When I was in high school, Middlebury was where we went to be cool. Except for the Ben Franklin, I couldn't shop in town, it was too expensive. But I can recall muttering obscenities with my friends while struggling to park my parents' car on the street. That's how cool I was then.

So when I wanted a town in Vermont, one with a place for an office and a house and streets to bike on, Middlebury came to mind. 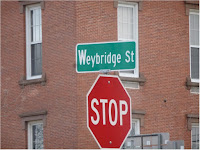 First off, I thought of Weybridge Street for the location of Walt and Nora's 70s/80s-era solar home. My Gauthier grandparents lived on Weybridge Street towards the end of their lives, and it is absolutely the only residential street in Middlebury I have any knowledge of. No brainer. 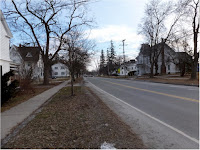 There are several scenes in the book in which Michael and Nora bike to her office. Here is a Weybridge Street view I had in mind for that. Note how flat it is. My kind of biking.  If you read about Michael and Nora on their bikes, think of this kind of street. 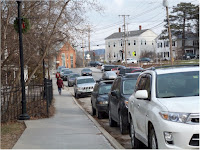 Here is what I was thinking of as Michael and Nora's first turn off from Weybridge Street on their daily commute. 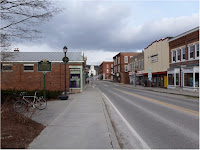 Then I envisioned them on a Main Street like Middlebury's. 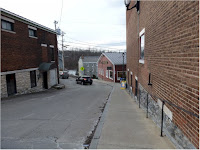 The bike trip to The Earth's Wife's office is described as including a steep incline. That's right. That didn't come out of  nowhere.There is an alley in Middlebury that leads to shops and what used to be the Vermont State Craft Center at Frog Hollow, which began during the time Walt and Nora were starting their magazine and was still a going concern while I was writing STP&S. 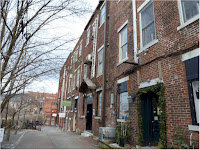 At the foot of this incline you also find the multi-floor back of some Main Street buildings. In my mind, this is where I located the entrance to The Earth's Wife's offices. They are on an upper floor, and Walt and Nora are renovating a lower floor for another editorial office. 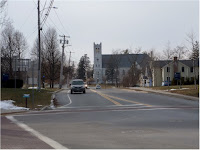 Enough about the ride to the office. In one scene Walt and Michael go to the East Branbury transfer station. I don't have a clue where Middlebury's transfer station is, or if individuals can access it the way Walt does. I just got Michael and Walt out of town by sending them out past a church. And I did have a church in mind, St. Mary's Catholic Church, which the Gauthiers have had some connection with over the years. 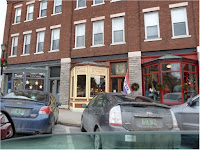 One of the most popular scenes in Saving the Planet takes place in a restaurant. I was thinking of one of these store fronts for the restaurant. We're no longer on Main Street here. We're on whatever turns off Main Street to go up the hill toward Rt. 7. Yeah, you know what I'm talking about.

So that gives you an idea of the kinds of things I do in my head to work on settings for a book, particularly this one. 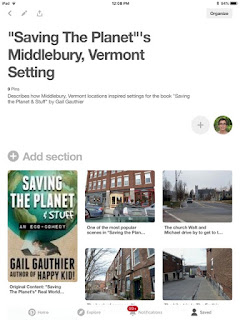 If you like Pinterest, I have a Pinterest Board on STPS's Middlebury setting. It includes some extra personal material on my connection to some of these places.  By the way, you can also find some Pinterest boards I'm using for character development on a new project.

This was really very interesting to read. I've walked those streets, recognized the restaurant setting on the hill leading up to Rte. 7, and speaking of Ben Franklin's, I've heard it is closing. This demonstrates how much work, preparation and inspiration is behind one of your books. Thanks for the education.

Thanks for your kind words.

I'm not surprised to hear about Ben Franklin. The other stores in the chain have disappeared, and the Middlebury one is a pale shadow of its former self.