So What Do YOU Do With Found Time?

This is what happened, folks. Friday night my plans for today, Sunday, changed. A family event was moved to the end of the month. In the meantime, today was free. That changed what happened yesterday afternoon, too. Because the cooking I was planning to squeeze in to yesterday afternoon after a morning elder care visit could be moved to today. You know, today, when I had nothing. Do the math. I suddenly had a day and a half to do what I had originally planned to squeeze into a half a day.


So when I stopped at the library after leaving the nursing home yesterday, instead of just dropping off some books, I stayed. For over an hour. I kept thinking, I can do this. I can stay as long as I want. Because I've got tomorrow.

The Cragin Library, where I was yesterday, has been one of my library haunts for years. I thought it was okay, but I was so wrong. You know how journalists keep saying that Meghan Markle and Kate Middleton stun because of something they're wearing that half the time is just so-so? Yeah, yesterday, the Cragin Library stunned. 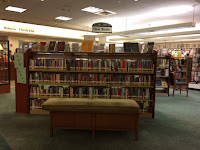 Look to your right and check out these New Fiction shelves in their Adult Department. That's a bench in front of it. Like the benches you see in museums in front of a work of art. Except the works of art here are books. You can make yourself comfortable while you're going over a couple of hundred new books. I love that. I have sat on that bench. Not yesterday, though. Yesterday, I had a different kind of experience there.

Yesterday, it was as if that library knew my interests. 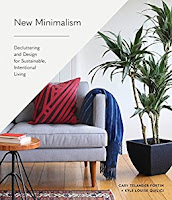 First off, I picked up three books from the Young Adult department, one of them being My Life in Pink & Green by Lisa Greenwald. I had heard of that and brought it home because it appears to have an environmental thread.

Then I went wandering around the New Adult Nonfiction (where there isn't a bench) and came upon a book on minimalism that, again,  I had heard about a few months back. Next I saw a book of essays by someone I'd never heard of, but they were supposed to by amusing. And I write essays! What showed up next but a book on writing flash fiction that looked pretty good. Guess what...I write flash fiction, too.

Then I go down to the Children's Department and pick up a couple of things including Grandfather's Journey by Allen Say. Now that I'm going to try to use for a speech therapy project I'm working on with an elder.

I finished up at Cragin's used book sale, where I got three books, one of them being Brave Companion's: Portraits in History by David McCullough, because I'd really like to read more history. Some history.

It was an amazing library visit, just amazing. I came home  drunk on books, unable to decide what to start with. I'm still overwhelmed and after cooking for a few hours today, I spent a couple of hours this afternoon reading old newspapers rather than decide where to begin with my library treasure. I have an embarrassment of riches here.

This weekend was a big one in Connecticut for children's lit activities. I could have used some of my found time to head out to an event. I feel a tiny bit guilty about that. But, in reality, I suspect nothing I could have done would have been as terrific as that library trip.


Posted by Gail Gauthier at 10:02 PM
Email ThisBlogThis!Share to TwitterShare to FacebookShare to Pinterest
Labels: Libraries