Time Management Tuesday: I Break Down And Try A Bullet Journal 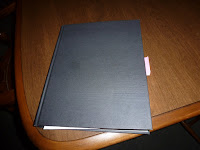 I finally tried a bullet journal more than a year ago, but I've never had time to write up how things went with it.

That's not true. Of course, I had time. I chose to use my Time Management Tuesday writing time writing about other things. A family member asked about bullet journals a couple of weeks ago, which motivated me to use some time to write about the bullet journal experience now.

The first thing you have to understand about bullet journals is that they are to-do lists kept in a formal journal with items preceded by coded symbols like bullets. Thus the name. (I wanted to get that out of the way.) The to-do lists are pretty elaborate, so much so that some people supposedly keep keys of their coding system. But they're to-do lists, nonetheless. That is not to denigrate them. I am a big fan of to-do lists. But when I first heard about bullet journals, I got the impression they were some kind of magical cure-all. I found them more hard work than magical. (Remember that key for the code.) Some of the work I found hard I never did. (The table of contents and the codes, to name two.) Others I've continued to use after the trial ended.


It seems to me that the most basic thing about bullet journals is that they allow you to break down your time so you can identify what you have to do and when you can find time to do it.

The Year. You'll start by breaking down the year. You divide a few pages in to 12 blocks, one for each month. Ten you enter what you have to do each month. You'll be updating this as time passes. I do, anyway. I don't know everything that's going to happen in September and October a the beginning of the year.

This aspect of bullet journals seems like a good idea. If you have a day job and/or family responsibilities that are going to be heavier some months than others, it's helpful to know that ahead of time. This will give you an idea of when during the year you've got your best shot at writing time. If you're a full-time writer and do things like teach at certain points of the year, you want to know that's coming up. You can block out time for revision, for working with an editor on books that are coming out, on marketing. You can commit time to new projects. You want to do NaNoWriMo? Put it in the bullet journal, and keep in mind that you'd better not plan for a lot of other things in November.

I've continued to do this kind of year-ahead planning.

The Month. The next division of time is one month. You'll write out a number for each day of the upcoming month and then briefly note what you expect to be going on in your life that day.

This aspect of bullet journals also seems like a good idea, especially for part-time writers who have to contend with other kinds of work. You'll see when you have free days or at least free-ish days to work.  However, I found it to be a lot of work and gave it up after a couple of months.

Other Things You Can Do. According to this BuzzFeed article on bullet journals (language warning, in case you care about that), you can dedicate pages to things you want to keep track of. In which case, you probably would want that table of contents that I didn't bother with. I often keep track of when I exercise or how long, for instance, and I could have made a couple of pages for that. I didn't because that would be making things more complicated, and I am a simple sort.

The Day. My understanding is that the next unit of time you'll work with in bullet journals is the day. If you're into coding, this would be a time to use that. There are codes you can use to indicate you've finished something or want to shift it to another day.

I wasn't crazy about this breakdown. The coding for one thing. All I need to know is that I have something to do, not whether the thing I have to do is an "event" or is some kind of "note" or is "scheduled." If it's on my list, I expect to have to do it, whatever it is. And once I do it, I'd rather just cross it out than have a code for "completed."

More importantly, though, I was used to breaking my day down still more. I separate my professional work that I do in forty-five minute segments, from home/life maintenance work that I try to knock off in the fifteen minute breaks between those forty-five minute segments. (You know...the unit system.)  And I don't like to pin myself down to doing a lot of things on a specific day, because if I don't get to many of them, well, how much does that stink? I think in terms of a week. Then if I don't get Monday's work done until Wednesday or Thursday, I'm still good.

I have found sites on-line that offer weekly plans for bullet journals. But they still seem to deal with a week of days.

The Week. I've been working with a week for years, as you can see to your right. All on one page. My work life. My personal life. Yoga. Walking and biking. After two months of trying a formal bullet journal with a monthly list and day notes, I went back to my weekly planning, but just put it in that nice black book I'd bought instead of using yellow legal pads. That's mainly because I'm cheap and had paid for thing and was out of legal pads.

So Am I Keeping A Bullet Journal Now?

My first thought is no, I'm not. I can't bring myself to stick to the bullet journal format, so I'm not keeping a bullet journal.

However, in snooping around the Internet, I found some interesting sites relating to bullet journals.

My point is, there are people out there messing with the bullet journal system, making it work for them. Maybe this thing has escaped out into the wild and is mutating, mutating in any number of ways to meet any number of needs.

So maybe I am keeping a bullet journal. And maybe if you try one, you'll end up keeping one, too.