I don't know if the conventional media picture of Vermont truly reflects the impact on the state of the arrival of new people in the '60s and '70s. While that kind of thing probably happened in many remotish areas starting in the second part of the twentieth century, two books I read during my retreat week in Vermont definitely reflect the two worlds that now exist in that particular place.

Vermont 1. Ruby in the Sky


At an appearance in December, author Jeanne Zulick Ferruolo said that her book Ruby in the Sky is set in Vermont because her family spent vacations there when she was a child. I believe she named a central part of the state, but I can't swear to it. It wasn't an area I connect with the arty, bohemian but comfortable lifestyle I was seeing described in Vermont Life a few years ago. And you don't see arty, bohemian Vermont in her book.

Instead, you see a more hardscrabble life with a mother and daughter moving back to mom's hometown after they've struggled elsewhere. Several elsewheres. They're back in Vermont because young Ruby Moon Hayes' mom has a cousin there who has offered help. But the kind of help she can offer is a house heated with wood and outdoor winter clothes purchased at a store called Family Thrift. Ms. Hayes' options for work are a diner where female employees put up with crap from the owner because they have to have jobs and a small market. When Ruby's mother gets into legal trouble with her boss, she has to rely on a public defender. How small is this town? The mayor hangs at the diner.

This is similar to the Vermont world I knew growing up. I had family members who heated with wood for years. (They didn't have running water for a long time, either.) Isolation. Limited job opportunities. Wandering around outside in the woods after school by yourself. (Though we didn't have neighbors living in sheds, as Ruby does.) The mother moving from place to place in Ruby in the Sky, never settling, never able to make a go of it anywhere, needing to come home to family? Yeah, I've heard of that kind of thing, too.

This is a Vermont I don't recall seeing in children's books. It's a world view that's probably familiar to readers from other rural, less than affluent places, too.

You know what Ferruolo didn't include in her story? Grizzled old farmers saying "ayeah," which I did see in a children's book a few years ago. I really, really appreciated that. Yes, I grew up saying "ayeah," myself, but I got tired of reading and hearing the stereotype fast.

Jeanne Zulick Ferruolo has another book coming out...ah, next week, actually. A Galaxy of Stars.

There are also no grizzled old farmers saying "ayeah" in The Vanishing Stair,  Maureen Johnson's sequel to Truly Devious, which I liked when I read it last year. In this case, it's an easy cliche to avoid because Johnson is dealing with a different Vermont. Her characters are almost all nonVermonters, students who have come to a private Vermont school.  These are young people of the arty, bohemian variety I mentioned before: writers, YouTube stars, artists, and musicians. You have the teacher who dresses in "expensive geek chic." None of these people have to shop at  Family Thrift as Ruby's family does. This book also takes readers on a side trip into the academic Burlington to meet with a University of Vermont professor.


This is a real Vermont, too, one I'm familiar with but was less a part of. (Well, I did graduate from UVM. And if memory serves me, I lived on Pearl Street in Burlington, which Johnson mentions, my first year out of school. Burlington was very, very cool then.)  As different as the Truly Devious/Vanishing Stair world is from Ruby in the Sky's, it is still very rooted in reality. How rooted?  The Truly Devious books are set in a remote private school, established in the 1930s by a wealthy New York City resident. I don't know how many private schools were started in Vermont in that era, but I grew up not far from Lake Bomoseen where  some of the Algonquin Round Table hung in the summers in the era Johnson's school began. Decades later, my mother, who I doubt knew who Alexander Woollcott and Dorothy Parker were (I barely know who Woollcott was), spoke of the writers on Lake Bomoseen. People from New York City were coming to Vermont back then and leaving a mark. So even Maureen Johnson's historical setting is believable. 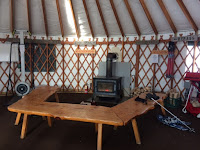 Oh, and in case any readers think the yurt that appears in Truly Devious and The Vanishing Stair is just a little too...I don't know...over the top? Wondering what one of those things is doing in Vermont? I was in one in Vermont just a couple of weeks ago! The place where we go for retreat has had one for several years. I find it very intimidating. I go inside to put on my snowshoes, but I'm always afraid someone is going to throw me out, because maybe snowshoes aren't supposed to be in there. I would never make it in The Vanishing Stair world.

The next book in the Truly Devious serial, The Hand on the Wall, was published last week.

They Are Both Real


So, seriously, I'm telling you, these two very different settings are both the real Vermont these days.

Posted by Gail Gauthier at 5:28 PM
Email ThisBlogThis!Share to TwitterShare to FacebookShare to Pinterest
Labels: 2019, middle grade, Reader response, YA