First Read Of The Year: "A Monster Calls" 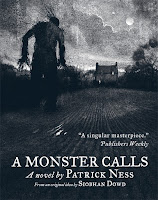 I finished reading my first book of the year a little after midnight on New Year's Day. I stayed up late for the Carnegie Medal winning A Monster Calls by Patrick Ness, inspired by an idea from the late Siobhan Dowd. The book is heavily illustrated by Jim Kay, who won the Kate Greenaway Medal for his work on it.

I was under the gun to get the book read, because a family member gave it to me for Christmas, 2018, and I was going to see her on January 4th. Yes, that's January 4th, 2020. I had started the book much earlier in 2019, but felt the sick mom and bullies (who I don't think were necessary to the story, by the way) made it  a "problem book," a genre in children's lit that I don't take to. But at the end of November, I thought, Hey, a college-age family member gave me this. Read it.

A Monster Calls deals with a boy who is visited by a monster tree in his yard. The kid doesn't find him all that frightening because his mother is dealing with a big set-back in her cancer treatment, and there are those bullies at school. Our protagonist has real-life monsters to deal with. The book is very well written, and in spite of the serious subject matter and tone, I did get to a 'what's going to happen?' point. The monster tells the boy three stories, the first two of which I liked very much.

Another family member has suggested more than once that I think too much. Nonetheless, I am going to report that I did wonder while I was reading A Monster Calls if it is really fantasy or, instead, a story dealing with a psychological issue relating to a child's emotional trauma. (Even though we're told that there is physical evidence that the monster did really call.)  Or is it magical realism, a genre that I find can get very deep and difficult?

I was concerned about how to respond to the young woman who gave me the book. A Monster Calls is extremely painful, not a book I would ever describe as entertaining, and I think an argument could be made that, as well done as it is, it doesn't offer any new insights on grief. (Of course, aren't all insights new to readers twelve and up, the age group the publisher markets the book to?) I knew my dear young girl had dealt with some family losses over the last few years. I needed to be sensitive, in case this book had some profound meaning for her, and she had chosen to share it with me.

So I asked her, "How did you happen upon this book? Was it assigned for a class? Something you heard about?"

"I saw it in a used bookstore and loved the illustrations."

I do, indeed, think too much.

Posted by Gail Gauthier at 3:10 PM
Email ThisBlogThis!Share to TwitterShare to FacebookShare to Pinterest
Labels: 2013, fantasy, fiction, Reader response, YA