I wasn't just talking about myself these past few weeks while working on the A Girl, a Boy, and Three Robbers' blog tour. I did some reading, too.

I was a big fan of Peter Abrahams' first Echo Falls Mystery, Down the Rabbit Hole. I'd heard from other bloggers that the second book in the series wasn't as good, and I have to say I agree. I was nearly a quarter of the way through the book before it became clear to me just what the mystery was this time around, and it was so close to the main character and her family that at that point this story revolving around steroid use among teen athletes seemed to be more of a problem novel than a mystery. The plot wasn't nearly as smooth as it was the first time around, either. 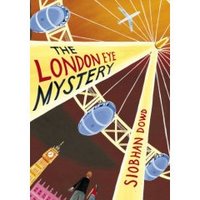 The London Eye Mystery by Siobhan Dowd, on the other hand, has a very smooth plot and well developed characters. It did seem a little Curious Incident of the Dog in the Night-time lite with its autistic main character. What are the chances of kid readers being familiar with that book, though? (Yes, it was a cross-over book, but it's five years old and no longer all over the place.) In addition, Ted, of London Eye, has less extreme autistic characteristics than Christopher in Night-time, while at the same time the mystery he needs to solve is more serious--the disappearance of his cousin versus the killer of a neighbor's dog.

Both these books are being marketed to middle grade readers.
Posted by Gail Gauthier at 5:54 AM
Email ThisBlogThis!Share to TwitterShare to FacebookShare to Pinterest
Labels: mystery

Great covers on both of those books!