A Couple Of Readercon Authors 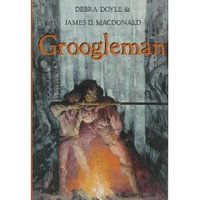 As part of my preparation for Readercon, I've been trying to read a few of the attending authors whom I'm not already familiar with. I began with two adult books that were pretty much a bust. One had a first-person narrator who was primarily a monologuist and the other had a first-person narrator who was bogged down in trying to sound authentic to his period.

However, I found a book from the mid-nineties called Groogleman by two authors I'd never heard of--Debra Doyle and James D. Macdonald--and that was impressively well-written. Seriously, this book combined two genres I don't normally care for, and I still thought it was very well done.

Groogleman starts out as one of those scifi stories about some kind of backward pre-technological culture that relies on medicine people in lieu of national health care. As a general rule, I feel that having read one of those books, I've read them all. But in this case, the authors don't drone on with the arty, mystical padding I usually find so trying with that kind of story.

Then Groogleman turns into another type of story that, quite honestly, is probably just a variation on the pre-technological culture that relies on some kind of medicine person in lieu of nationalized health care scenario. I don't want to say too much because it's sort of a twist. I don't care for this type of story because it's really been done a lot. But, as I said, Doyle and Macdonald do it here very well.

And then we have a third type of story thrown into the pot--the pivotal adult character in a children's story. This is a type of story I do like, which is incredibly odd because I don't like to see adults dominating a children's book. Usually the reason these stories work is that the adult character is some kind of outsider or perhaps childlike in some way, like Howl in Howl's Moving Castle. In Groogleman, Joshua is, indeed, an outsider, but instead of being childlike he's just plain mysterious.

I think Groogleman is a balanced book, meaning that the plot is balanced by quickly drawn but well-defined characters and a setting that is atmospheric without becoming overwhelming. It's written in the third person, but two of the three main characters have clear voices. The main character's voice is the least powerful, but that works. I think readers are able to slip into his place because of his everyman quality.

I do think the ending is a bit rushed, and the authors may have given too much away in a couple of the quotations that appear at the beginning of chapters. (But maybe not if you're a child reader.) Otherwise, I have to say that Groogleman was a nice surprise.
Posted by Gail Gauthier at 7:21 PM
Email ThisBlogThis!Share to TwitterShare to FacebookShare to Pinterest
Labels: Reader response, science fiction