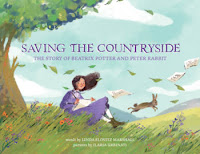 Many years ago, when I was doing the Room Mother thing at my sons' school, if you can imagine that, I volunteered to be responsible for the spring party for my younger boy's second grade classroom. Our school wanted to eliminate Easter parties, because observing Easter in a public school was too much like observing a religious holy day. Christmas, it can be argued, is losing its religious connection, but Easter, not so much. Evidently the administrators felt taking away a party was too much to ask of kids and probably their parents. And, thus, the Spring Party was invented.

I went with a Beatrix Potter theme, because her Peter Rabbit stories meant we could still have chocolate eggs and bunnies. But, additionally, there is so much about Potter that can work in a classroom. Someone could do an entire unit on her and include literature, writing, art, nature, women's history, and probably more.

Which brings me to Saving the Countryside: The Story of Beatrix Potter and Peter Rabbit by Linda Elovitz Marshall with illustrations by Ilaria Urbinati, which was published by Little Bee Books this past January. The book deals with Potter as a conservationist, another aspect of the writer that could be covered in a school unit.

Author Jama Kim Rattigan has an impressive and extensive post about Saving the Countryside at her personal blog, Jama's Alphabet Soup. In addition to information about and images from the book, she has Potter collectibles to share and a recipe from Beatrix Potter's Country Cooking by food writer and food historian Sara Paston-Williams.

Posted by Gail Gauthier at 8:48 AM
Email ThisBlogThis!Share to TwitterShare to FacebookShare to Pinterest
Labels: 2020 books, Beatrix Potter