You have not seen me here this past week, because I just spent three-and-a-half days with a two-and-a-half-year-old boy who has a new baby sister coming home soon. I made pumpkin custard, blueberry babycakes, and  two batches of cupcakes, because I made the first one with the two-year-old and may have left out the baking powder. I  did crafts and learned how to find Little Baby Bum and Super Simple Songs on YouTube. 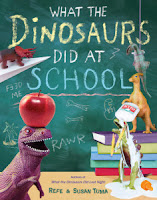 I  also read What the Dinosaurs Did At School by Refe and Susan Tuma before every nap and every bedtime. And maybe once in the middle of the night. The kid couldn't get enough of it. I liked it a great deal, too. Thank goodness.

I was very grateful whenever I read this book, because there was another one our little guy liked a lot that was a long, heart-tugging poem. He thought the cover illustration for that one was of him and his mother. What the Dinosaurs Did At School, on the other hand, is a very clever and amusing story told totally for laughs. The amount of text is great. The narrative drive is good.

I'm not sure what a two-year-old sees in it, though, because I think to get the jokes and really appreciate the whole situation, you may need to have some knowledge of school. I was concerned I was going to have to do a detailed explanation about the section regarding ventilation, for example, but it didn't come to that. I just had to answer the question "What that dinosaur doing?" a lot.

The illustrations are photos of plastic dinosaurs posed as if they are behaving very, very badly. The combination of the reality of the photos and the dinosaurs raising hell may be an irresistible draw for tiny listeners.
Posted by Gail Gauthier at 12:47 PM
Email ThisBlogThis!Share to TwitterShare to FacebookShare to Pinterest
Labels: 2017, Picture books, Reader response