I wish I could recall why I requested Outside In by Deborah Underwood from my library's e-book service. Was it on one of my 2020 monthly book release posts? Deborah Underwood and I follow each other on Twitter, so I may have heard about the book there. Or, since it appears the book has picked up a number of awards, it may have crossed my psyche in other ways. For instance, it's a Caldecott Honor Book for illustrator Cindy Derby's moody artwork, which really melds with the moody text. Since I read library e-books on my iPad and not on my ancient Kindle, I was able to enjoy said artwork. 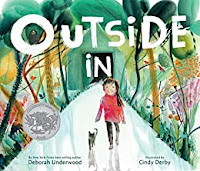 Putting aside the mystery of how I found this book, reading it was a true experience. I was not terribly impressed with the first line. "Once we were part of Outside and Outside was part of us." Then came the next two. "There was nothing between us. Now sometimes even when we're outside...we're inside." With a perfect illustration.

It was at this point that I felt the top of my head come off, so to speak. If you are knowledgeable about Emily Dickinson, which I'm not, or have been watching the TV show Dickinson, which I have, you may be familiar with Dickinson's definition of poetry. If she is reading a book, she said, and "If I feel physically as if the top of my head were taken off, I know that is poetry."

I don't want to claim this book is poetry. I don't know enough about poetry to do that. I've seen nothing to indicate Underwood considers herself a poet, and her attitude is the all important one. But last year I developed a modest interest in prose poetry, and that's how I read this book--as a prose poem expressing a specific thought in an intense way.

Maybe that was because I had that top-of-my-head-off feeling while reading it.

Why Is This An Environmental Book Club Post, Gail?

Well, Outside In, is, I think, a description of how we live with the outdoors even when we don't know that we're doing it. I wrote off the first line as just the beginning of another cliched nature tale, about how humans have lost nature. But "Once were were part of Outside and Outside was part of us" isn't a lead in to that kind of story at all. Because what I think Underwood is saying here is that Outside has come in with us. That's how we live now with the Outside In with us.

The publisher describes this book as being for ages 4 through 7 and grades Pre-K through 3. I tried reading it to a nearly 4-year-old whose tastes run to Mike Mulligan and His Steam Shovel and Pete Oswald's Hike. In spite of the multitude of mini-hikes he did during the pandemic, Outside In was lost on him. Keeping in mind that one is not a statistically significant number, perhaps this book would be better for the readers on the older end of this age range.

Yeah, I'm kind of enthusiastic about this one.