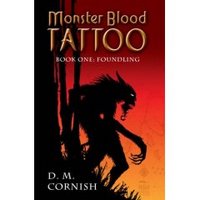 I received a copy of Monster Blood Tattoo by D. M. Cornish several months ago. I had a hard time working up much enthusiasm for a book with a monster on the cover and a monster in the title. But I started seeing references to the book here and there on the Internet and finally decided to give it a go.

Monster Blood Tattoo took me back to my teenage years when I was reading expansive historical novels about characters' struggling through adventures out in the big world. Except that this is no historical novel. It's set in a marvelously imagined and detailed world in which monsters are very, very real, and people have to watch out for them on a daily basis. It sounds a little bit like the nineteenth century (I've read somewhere that the nineteenth century is a trend in fantasy, a move away from the medieval stereotype.) but not any nineteenth century we've known.

A young orphan leaves the institution in which he grew up to set out on a career. But on his way to the new job, he's kidnapped. And it's one thing after another after that. The book is filled with unusual terminology, some of which is defined at the beginning of each chapter. I didn't find that any more difficult to deal with than the terminology in many scifi book or even some historical novels. But for readers who find themselves lost, there is an enormous "Explicarium" at the end of the book. I don't think it's necessary, myself, though it does give you a little backstory on some of the characters. Some great characters, by the way (my favorite is Europe), who appear in illustrations done by the author.

My only complaint about this book is that it's a "Book One" and doesn't actually end. Oh, I suppose you could argue that it ends because young Rossamund completes the first stage of his journey. But it's very clear that we've been left wanting more. There's not a completed story here.

I will be looking for the next book, though, and I can't say that about a lot of serials that I read.
Posted by Gail Gauthier at 6:34 PM
Email ThisBlogThis!Share to TwitterShare to FacebookShare to Pinterest
Labels: Monster Blood Tattoo

I liked Europe best too!

I believe I mentioned that the 18th and 19th centuries were becoming the new Middle Ages in YA fiction over on my Blog several months ago...

That could very well be where I saw it, Michelle.